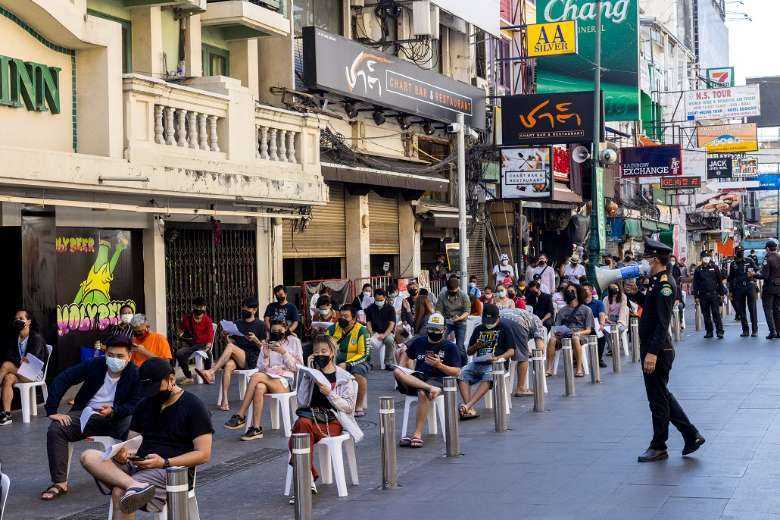 People queue for Covid-19 tests as hospitality and tourism workers are tested on Khao San Road in Bangkok on Jan. 6. (Photo: AFP)

More Thais are at risk of taking their own lives out of extreme desperation over their financial plight, according to Thailand’s Department of Mental Health.

According to a new nationwide poll that surveyed nearly 2.6 million Thais in a country of 70 million, nearly 5.5 percent of respondents said they felt suicidal over their situation as the ongoing pandemic has battered the economy, especially hurting low-income earners.

Nearly one out of 10 respondents said they felt highly stressed or very depressed over their financial status in what healthcare experts said is an alarming trend.

If the poll accurately reflects sentiments, some 141,000 respondents were considering committing suicide, although it is likely that the vast majority of them will not act on such impulses.

However, the economic prospects of millions of Thais are unlikely to improve greatly over the short term.

Since March 2020, when foreign travel on a large scale effectively ceased as a result of onerous entry requirements, Thailand’s tourism-dependent economy has suffered a blow with millions of people finding themselves out of a job.

Many tourism-related business from restaurants to nightlife venues to hotels have closed down permanently, leading to rising unemployment in the sector.

For millions of Thais from disadvantaged backgrounds with low educational attainment, the pandemic has been financially ruinous, which has led to an increase in the rate of suicides.

The nationwide suicide rate rose to 7.37 per 100,000 people last year from 6.64 the year before, including an increase in the rate for those between the ages of 10 and 19, according to the Mental Health Department, although the actual rate is believed to be much higher.

Experts have said that inadequate mental health services and a lack of social security provided by the government have helped drive desperation among Thais in a country where substance abuse, especially in the form of cheap methamphetamines, is also endemic, particularly among low-income earners.

In recent months the number of homeless people has risen visibly around Bangkok, with destitute people, primarily men, sleeping rough on streets and begging for money with discarded plastic cups.

Even millions of people who have not been made homeless have been struggling in economically deprived communities such as inner-city slums.

I can make just enough to survive, but I know many people who haven’t had any real income for months

“It has been very hard for us,” Suwirat Meeboon, a motorcycle taxi driver who works in central Bangkok and lives in a slum-style neighborhood, told UCA News.

“I can make just enough to survive, but I know many people who haven’t had any real income for months.”

Thailand reopened its door to foreign tourists late last year, but the spread of the Omicron variant of the coronavirus has caused the government to tighten entry requirements once again, leaving many tourism-related businesses in suspended animation.

“The longer this [pandemic] goes on, the worse it will get for poor people,” Suwirat said.