Filipinos urged not to treat pope like a celebrity 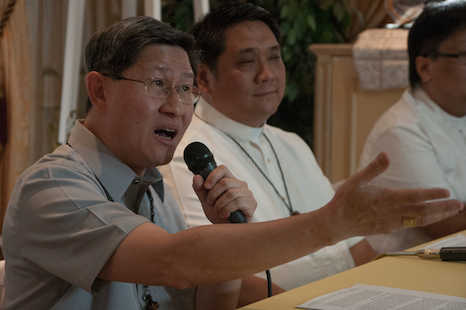 Cardinal Luis Antonio Tagle (left) and Bishop Mylo Hubert Vergara of the social communications office of the bishops' conference brief the media on the visit of Pope Francis. (Photo by Roy Lagarde)

A Catholic bishop on Sunday urged Filipinos to avoid treating Pope Francis, who will be visiting the country in January, like a celebrity.

"Sometimes people treat occasions like this as if a celebrity is coming. I hope people will instead look at what message Pope Francis is trying to tell us," said Bishop Pedro Arigo of Puerto Princesa.

The prelate said activities during the pope's visit should be "simple and not extravagant".

"Pope Francis was displeased with the reception after the canonization of Saint John Paul II and St John XXIII because it was extravagant," Arigo told Church-run Radyo Veritas.

"We should make [the activities] simple because if we make it too extravagant that will be an insult to the poor," he said.

Cardinal Luis Antonio Tagle has said that Pope Francis wants his visit to the Philippines "to be pastoral and simple."

"Central to the visit of the pope is to show solidarity and compassion to victims of calamities," said Tagle.

He said that Pope Francis wants to have an "encounter" with those who suffered recent calamities, especially in the central Philippines where Super Typhoon Haiyan killed more than 10,000 people and left millions of others homeless last November.

The Philippine bishops' conference in a pastoral statement last month said the underlying spirit of the papal visit to the country is "mercy and compassion."

"Our compassionate shepherd comes to show his deep concern for our people who have gone through devastating calamities," the statement said.

"He comes to confirm us in our faith as we face the challenges of witnessing to the joy of the Gospel in the midst of our trials."

The bishops encouraged the faithful to prepare for the pope's visit by spending more time in prayer.

Fr Amadeo Alvero, spokesman of Palo archdiocese in Leyte province, said the pope's visit will "inspire victims of one of the greatest disasters that ever happened on earth".

Pope Francis will be the third pontiff to visit the country after Pope John Paul II in 1995 and Pope Paul VI in 1970.