Manny Pacquiao is being urged to give up boxing and his dream of becoming president of the Philippines. (Photo: AFP)

Filipinos are urging boxing icon Manny Pacquiao to retire from boxing, give up his dream of leading the country and come out fighting for the opposition against anointed candidates of President Rodrigo Duterte in next year’s presidential election.

Pacquiao lost to Cuba’s WBA world welterweight champion Yordenis Ugas on points on Aug. 22 in Las Vegas, prompting many to urge him to say goodbye to the ring.

“Retire from boxing now while you are still the people’s champ. Give all you can to support the fight against corruption. Finish your term in the Senate, then start campaigning, give all your support to the opposition’s candidate in 2022,” Manila parishioner Thelma Amoranto said on Aug. 23.

Pacquaio should hang up his gloves and focus on serving the people as a philanthropist, she said.

She also said the boxing icon should focus on making laws that would benefit Filipino athletes.

“He is an athlete. Perhaps he can sponsor laws to protect athletes’ rights as well as giving funding for their training. The presidency is not for him.” Amoranto added.

With all the money you have, you can do a lot of help without the intrigues and complexities of politics

Others want the former champion to retire not just from boxing but also from politics.

“You will be doing yourself and your country a huge favor if that happens,” said Quezon City churchgoer Jeffrey Cruz.

Cruz said Pacquiao could save himself and his family from a stressful life in politics by starting a foundation rather than running for president in 2022.

“Better to be a private citizen and a philanthropist. With all the money you have, you can do a lot of help without the intrigues and complexities of politics,” he added. 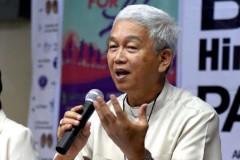 Cruz was referring to comments made by Pacquiao’s spokesman just before the Aug. 22 fight.

“The boxing is just a bonus. After the Las Vegas fight will be the biggest fight of his life in May [elections] next year,” Monico Puentevella told Al Jazeera.

“It does not matter who else is running but Manny Pacman Pacquiao is going to run for president … he will file his candidacy.”

Father Emman Afable, a priest from Sorsogon city, said it was time for Filipinos to vote for leaders based on competence, not on popularity.

“This is my personal advocacy. Please, look at the track record of candidates. We elect leaders who do not value honest governance and human rights,” Afable told UCA News.

He said he feared Filipinos, by voting for Pacquiao, would be making the same mistake as they did when they made former actor Joseph Estrada president in 1998 and he was later impeached.

“We had an actor who got jailed because of corruption. Enough is enough,” he said.