Filipinos told to hold on to 'prophetic work' for justice Activists scuffle with police during a protest in February 2016 near the EDSA Shrine along a highway in Manila commemorating the anniversary of a bloodless revolt that ended the rule of dictator Ferdinand Marcos in 1986. (Photo: Noel Celis/AFP)

Share this article :
Ecumenical church leaders in the Philippines have urged Filipinos to continue their "prophetic work" for justice as the country marks the 34th anniversary of the 1986 People Power Revolution.Hundreds of activists, including church people, marched in the streets of Manila on Feb. 25 to denounce human rights abuses that continue to this day."We denounce the evil of our present realities," read a statement from the ecumenical church group One Faith, One Nation, One Voice.The group called on people to "live out the spirit of people power," adding that "the prophetic call to side with the oppressed is still relevant and necessary."The People Power Revolution, which put to an end to the two-decade rule of Ferdinand Marcos, was a series of demonstrations, mostly in capital Manila, from Feb. 22–25, 1986. Millions of people trooped to a highway that bisects the Philippine capital during the four-day uprising.
Related News 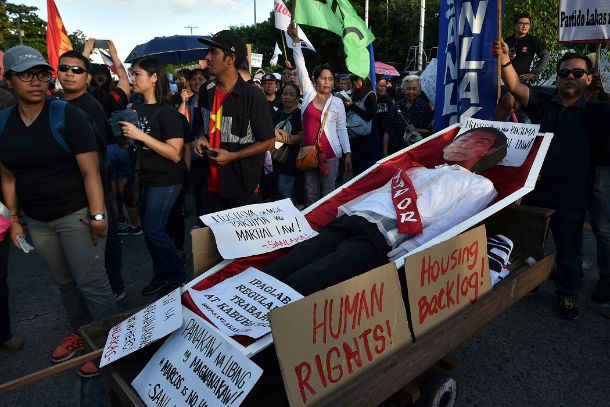 In activities held in Manila to mark the anniversary, church groups recalled "the great testimony of church people in their commitment to follow the commandment of loving their neighbors.""Today, we remember such struggle," read the statement of One Faith, One Nation, One Voice."We are reminded that the prophetic call to side with the oppressed is still relevant and necessary," it said, adding that attacks against the people continue."Church people, who identify with the struggle and aspirations of the people are persecuted, maligned and, at times, even murdered."President Rodrigo Duterte, meanwhile, called on people to set aside "petty" political differences as he hailed the non-violent revolution as "one of the most remarkable events in our nation’s history.""Inspired by the freedoms that we secured in February 1986, let us all rise above our petty political differences so that we may, together, ensure that the legacy of [the revolution] will remain relevant in the years ahead," said the president in his message.He said he shares a sense of "renewed hope" that the succeeding generations of Filipinos will be inspired to protect and preserve the liberties won during the revolution.Protesters, however, accused the president of running an administration that has many similarities to that of the late dictator Marcos.The activists focused their criticism on alleged human rights violations during the president's war on drugs that has claimed thousands of lives.Government data showed that from July 1, 2016, to June 30, 2019, the drug war had claimed the lives of 5,526 suspected drug users and peddlers.Human rights groups, however, claim the death toll is about 27,000, including victims of vigilante-style killings.Protesters also denounced the so-called “red-tagging” by the government of activists, including several church leaders. The term refers to accusing people or groups of supporting or being communist rebels.The Promotion of Church People’s Response called on people to "rise to the challenges of our continuing struggle for sovereignty and independence."The group also called for opposition to the stationing of foreign troops in the country that "makes us more vulnerable" to attacks.Human rights group Karapatan, meanwhile, said the 1986 people's uprising "displayed the power of the unity of the Filipino people" against Marcos."Today, 34 years later, the Filipino people are again confronted with another despicable tyrannical regime," it said.The group said the country is confronted with "worse forms of violations and harassment and a string of repressive laws that curtail our basic rights and freedoms."