Filipinos told to be vigilant during Holy Week Thousands of Filipinos, who usually go to the provinces for a break, crowd bus terminals in Manila ahead of the observance of the Holy Week. (Photo by Mike Taboy)

Filipinos are urged to be more vigilant during the observance Holy Week this year after reports of a terrorist threat in the national capital Manila surfaced this week.

Father Jerome Secillano, head of the public affairs committee of the country's Catholic bishops, said it would help authorities a great deal if people would be aware of their surroundings as they perform religious activities.

The priest, however, assured that no amount of terrorist threat would deter Filipinos from observing traditional Holy Week practices.

"There are always threats, but Filipinos are not deterred from doing their spiritual activities," said Father Secillano. "It has always been like that," he added.

The priest said people are "more inclined to pray for security from God" when there are threats. He urged people to be remain calm and not to let fear overcome them during dangerous situations.

Father Secillano said the authorities are capable of keeping the public safe. "They've done their job effectively and let's hope that they'll continue to do so," said the priest.

"Let the police do their work while we continue to lead the people in their faith," said the prelate.

National police chief Ronald dela Rosa warned March 21 that a cell of a group linked with the so-called Islamic State has been discovered in the Philippine capital.

The police chief made the announcement following the March 20 arrest of a suspected terrorist who has been involved in a failed attempt to bomb the United States embassy in Manila in November. Manila on high alert ahead of Black Nazarene feast 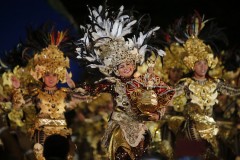 Armed Forces spokesman Brig. Gen. Restituto Padilla said the military is "coordinating with the [police] on the matter."

"For the [military], it is not a question of whether any threats exist but rather when these threats become active. Hence, the need to be prepared at all times," said Padilla.

The official appealed to the public to "go about their normal activities and not to allow such information to derail them from their normal routine."

Every year, thousands of Filipinos head to the provinces for a long vacation during the Holy Week break that kicks off on Palm Sunday.

Many take extra time off work to enjoy a week-long vacation as Holy or Maundy Thursday and Good Friday are national holidays.