Fishermen, farmers blame the crisis on Chinese encroachment but the government blames a recent typhoon 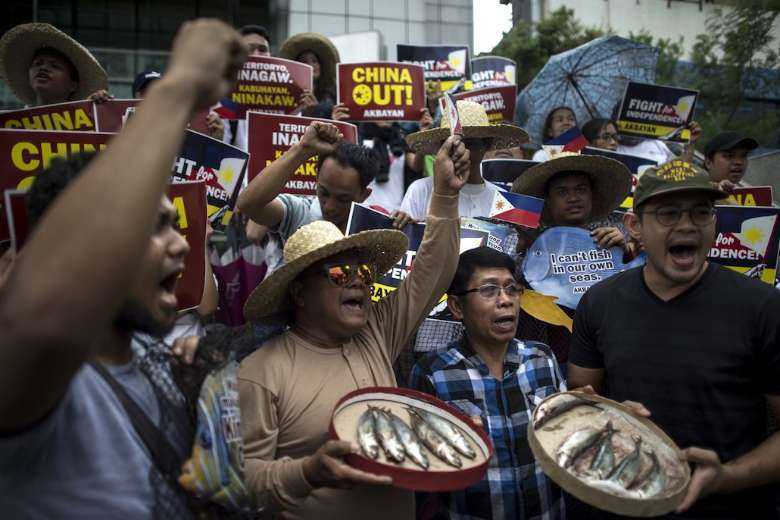 Activists hold trays with fish during a protest in front of the Chinese Consular Office in Manila on June 11, 2018. The Philippines demanded that China stop confiscating the catch of Filipino fishermen in the disputed South China Sea. (Photo: AFP)

Farmers and fishermen in the Philippines have disputed a government claim that an acute national shortage of fish was a knock-on effect of a recent typhoon, saying the problem stemmed from Chinese vessels being allowed to fish in the country’s territorial waters.

The row erupted on Jan. 18 when the Agriculture Department announced the government would import 60,000 tons of fish to cover the shortage.

It said the shortage was expected as many fishing boats in the archipelago, which is composed of about 7,640 islands, were damaged by Super Typhoon Rai when it ravaged the Philippines last month.

“The shortage was an effect of the typhoon. The fishing industry suffered the most with 3.97 billion pesos [US$79.4 million] in losses,” Agriculture Secretary William Dar told reporters on Jan 18.

He said the solution was to buy fish from other countries like China.

However, a group of Christian farmers and fishermen said the government should stop blaming the shortage on a natural calamity, saying it was the likely result of pandering to China.

Our members have been shot with water cannon in the very area which is supposed to be ours. Now we are importing fish from the very country that steals our fish

“This is mind-boggling. The Philippines is an archipelago but we are experiencing a shortage of fish. We should stop blaming natural calamities on this and look at the policy of allowing China to fish in our exclusive economic zones,” the group’s spokesman Roberto Mandique told UCA News.

Had President Rodrigo Dutere followed a ruling by an international arbitration panel that only the Philippines has exclusive right to fish in its own economic zone, there would be no shortage of fish, he said.

In a 2016 landmark ruling, the Permanent Court of Arbitration in The Hague invalidated China’s nine-dash line theory in the South China Sea and backed the Philippines’ territorial and economic claim on waters extending 200 nautical miles from its shores.

The ruling said that the country’s exclusive economic zone was reserved only for Filipino fishermen.

In May 2021, Duterte called the ruling a “mere scrap of paper” that he could throw in a trash bin.

According to the farmers and fishermen, Duterte’s pro-China policy has allowed the illegal presence of Chinese fishermen in Philippine waters, which has deprived Filipino fishermen of their livelihood.

“Our members have been shot with water cannon in the very area which is supposed to be ours. Now we are importing fish from the very country that steals our fish,” Mandique said.