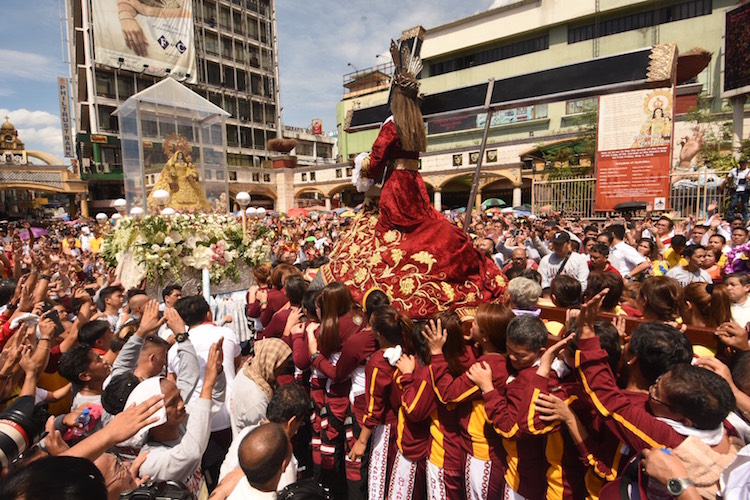 Devotees carry the images of the Black Nazarene and the Our Lady of Mount Carmel in a "meeting" during a religious procession in Manila on May 4 to mark the 400th anniversary of the arrival of the Virgin Mary's image in the Philippines. (Photo by Angie de Silva)

Thousands of Filipino Catholics walked under the heat of the sun for about four hours to mark the 400th anniversary of the arrival of the image of Our Lady of Mount Carmel in the Philippines.
People gathered as early as two o'clock in the morning on May 4 to relive the arrival of the image from Mexico in 1618 with the third mission of the Order of Augustinian Recollects.
Several streets in Manila were closed to give way to the "Salubong" and "Traslacion," literally the "Meeting" and "Transfer" respectively, of the image from the Bay of Manila to the Minor Basilica of San Sebastian in Manila's Quiapo district.
The procession passed by the city's Quiapo district to "meet" the image of the Black Nazarene. Teary-eyed devotees sang and chanted prayers during the reenactment of the historic arrival of the Virgin's image in the city.
The meeting of the images was iconic because aside from simulating the moment when Jesus meets Mary as he carries the cross to his crucifixion, the meeting of the two images in Manila is a reconnection of two statues that had the same origin.
Ysabel de Dios, a tour guide at the San Sebastian Church, said both images were brought by the Augustinian Recollects from Mexico and were both stored in the same church and were both enshrined in Quiapo district.
While the Our Lady of Mount Carmel image was a gift from Mexican Carmelite nuns to traveling Recollect missionaries in 1618, the Black Nazarene was done by a Mexican sculptor and believed to have been brought to the Philippines at around the same time.
"The two icons bring droves of people here, and actually catalyzed the transformation of Quiapo from a poor fishing village in 1621 to the center of culture and the arts in 1891," said De Dios.
The image of the Our Lady of Mount Carmel is a key figure in the annual feast of the Black Nazarene, which attracts millions of devotees from around the country every January. Filipinos accompany the image of the Our Lady of Mount Carmel in a religious procession in Manila on May 4 to mark the 400th anniversary of the arrival of the Virgin Mary's image in the Philippines. (Photo by Angie de Silva)

In his homily during the early-morning Mass, Archbishop Romulo Valles of Davao, president of the Catholic bishops' conference, urged the faithful to follow the example of the Virgin Mary to "be joyful in our faith, come what may."
"She stood at the foot of the cross without words ... keeping her faith even in the tragedy of the cross," said Archbishop Valles.
"Mary always brings us to Jesus. With Mary our recognition, our trust, our confidence in the love and mercy of the Lord are always strengthened," added the prelate.
He recalled a woman he saw in an evacuation center in the southern Philippines after the siege of Zamboanga City in 2013.
"I was struck by an image of this woman hugging the image of the Blessed Mother with love and affection," said the prelate.
He said that when he approached the woman to check how she was, she said the image was the only thing that she brought when she fled her home during the war.
"Indeed our faith is always made strong, always inspired by the presence of the Blessed Mother," said Archbishop Valles.
The arrival of the image began a devotion that remains popular throughout the country today, as witnessed by the number of Filipinos who continue to wear the distinctive brown scapular, which is associated with the image, as well as the growing number of parishes and schools placed under her patronage.
The image is associated with anti-nuclear proliferation efforts. In 1990, Father Emmanuel Charles McCarthy — an American priest from the Melkite Greek Catholic Church, an Eastern-rite church in communion with the pope — initiated a day of prayer "for forgiveness and protection" at the New Mexico site of the first U.S. atomic bomb test called Trinity.
Every July 16 since then, the day is dedicated to prayer vigils for peace and the elimination of nuclear weapons.