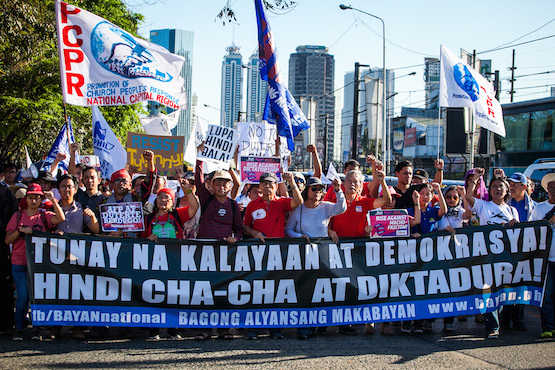 Priests and nuns join activists in a protest march to mark the 32nd anniversary of the 1986 People Power uprising in Manila that restored democracy in the country. (Photo by Mark Saludes)

Filipinos marked the anniversary of the peaceful uprising that restored democracy in 1986 with protest marches and rallies over the weekend.

Priests and nuns marched with activists to voice their concern over what they described as the resurgence of dictatorship under Philippine President Rodrigo Duterte.

The Feb. 22-25 so-called "People Power" uprising 32 years ago resulted in the ouster of former president Ferdinand Marcos and the formulation of a new constitution in 1987.

Recent proposals for the amendment of the country's basic law, however, have raised concerns that it might "pave for way another dictatorship."

Benedictine nun Mary John Mananzan, a vocal critic of the government, said the present administration is trying to "concentrate all powers into one man's hands."

She said a proposed revision of the constitution is a "formula for complete tyranny and dictatorial rule."

"We cannot allow another era of darkness," said the nun, one of the conveners of the newly-formed Movement Against Tyranny.

Catholic bishops have issued a statement saying that although the 1987 constitution is imperfect it is "consistent with the Gospel."

The present constitution prohibits divorce, the death penalty and the use of artificial contraceptives, among others.

In their statement, the bishops said attempts to revise the charter should require "widespread peoples' participation and consultation."

Carmelite Father Bilbert Billena, spokesman of the activist group Rise Up for Life, said the anniversary of the "People Power" uprising is a reminder of the Filipinos' "duty to protect democracy."

"A lot of people have given their lives for the democracy we all enjoy today. It is our responsibility to stand against any threats," said the priest.

In a statement, the National Council of Churches in the Philippines said social justice remains elusive with killings and the displacement of people in rural areas.

The Protestant group said it is the responsibility of the church "to place a high priority on social justice to achieve an equitable and higher quality of life long denied to so many."

Cardinal Luis Antonio Tagle of Manila stressed that peace is not only the absence of violence but is "the fruit of justice, truth, love and respect."

"Sow peace and you will reap peace," said the prelate in his homily during a Mass to mark the anniversary of the uprising.

He said one way to achieve peace is "to love even your enemy as this is what Jesus wants us to do."

In their statement, the Association of Major Religious Superiors in the Philippines said the 1986 uprising showed to the world that dictatorship can be toppled and tyranny can collapse.

The group said that people are once again called "to continue to dream and to toil ... to emancipate the people from poverty and want."

"Hate and divisions reign in our politics, culture and social life. Indeed there is a pressing need to change ourselves and our society," the religious association added.

In his message during the anniversary celebration, President Duterte called on Filipinos to "enrich our democracy" by empowering citizens and defending their rights.

"May this occasion foster the unity and solidarity as we pursue our hopes and aspirations for our nation," he said.

The president noted how Filipinos, through the 1986 uprising, showed the world how a people's courage and resolve can alter the course of a nation's history.

He said the "People Power" revolution has since become an enduring symbol of the determination of the people to fight for what is right "during our country's most crucial and trying times."