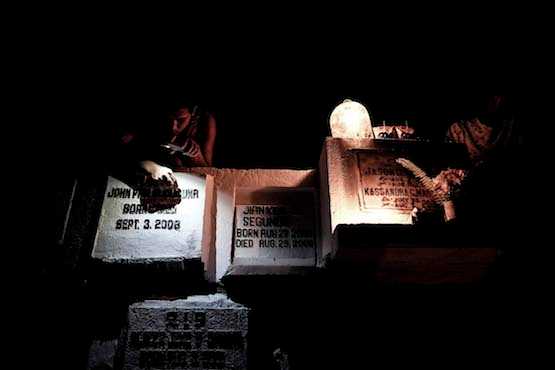 A man puts the final touches to the tomb of a loved one in the northern Philippine province of Pangasinan ahead of the observance of All Souls' Day on Nov. 2. (Photo by Karl Romano)

Continuous rain literally dampened the annual observance of All Souls' Day in the Philippines where thousands of Catholics visit the graves of their departed loved ones.

In Manila, an estimated 1.5 million people visited cemeteries on Nov. 1, All Saints' Day, a day ahead of the church observance to remember the souls of those who died.

Police conducted tight security checks in cemeteries around the country as authorities continue to pursue remnants of a terrorist group that attacked Marawi in the southern Philippines.

In the suburb of Quezon City in the capital, local police chief Guillermo Eleazar said at least 1,600 police officers were deployed in six cemeteries and 15 columbaria.

He said despite reminders not to bring prohibited items such as guns, knives, and gambling paraphernalia to cemeteries, police were still able to confiscate hundreds of these.

In the provinces, heavy rain and floods did not deter people from visiting the tombs of their loved ones.

In his message to Filipinos, President Rodrigo Duterte called on people to be "agents of positive change" and contemplate on how to make the country "a much better place."

The president paid tribute to those departed and the saints who “enriched Catholics’ faith and made an impact on the lives of many.”

"Their lives inspire us to build on their legacy, to make our mark in this world and to dedicate ourselves to causes that are greater than our own self-interest," said Duterte.

Families of victims of the government's war on drugs, meanwhile, held gatherings in churches and cemeteries around the capital to call for justice for their kin.

Human rights groups claim that close to 12,000 suspected drug users and dealers have been killed in Duterte's anti-narcotics war.

The Philippine National Police, however, said only about 3,000 people were killed in legitimate police operations against suspected drug dealers.

Father Gilbert Billena of the group Rise Up for Life and Justice said one reason to observe All Souls' Day with families of the victims is "to draw inspiration and courage to seek truth and justice."

On Nov. 2, about 50 families of victims of involuntary disappearances and extra-judicial killings in the country joined at least a hundred religious, human rights advocates, and activists in lighting candles and offering prayers for victims of state violence.

An ecumenical organization of young people, Nicodemus Youth, held a prayer vigil to show their support for a call issued by the country's Catholic bishops for a rally on Nov. 5 to call for a stop to the killings.

"Even though we are young, we hope that by this action, we will help amplify the call to stop the killings and start the healing," said Angelo Araja, the group's spokesman.