Residents queue to collect free food from a 'community pantry' in Quezon City in suburban Manila on April 21. Community-run stalls offering food to the needy have multiplied across the Philippines, with many struggling to feed their families as coronavirus restrictions bite and government help falls short. (Photo: AFP)

On May 1, the Catholic Church celebrates the Feast of St. Joseph the Worker. St. Joseph has two feast days in the Church’s calendar. The other is on March 19 as Spouse of the Blessed Virgin Mary.

On Labor Day, clergymen usually bless tools or equipment used by manual laborers to signify the sanctity and dignity of human work.

In 1892, Pope Leo XIII wrote an encyclical entitled Rerum novarum stating the position of the Church on matters of importance to the people.

The encyclical addressed questions on class conflicts brought about by capitalism and industrialism. It also addressed conditions of the working class and the relationship between capital and labor.

“Workers are not to be treated as slaves; justice demands that the dignity of human personality be respected in them … gainful occupations are not a mark of shame to man, but rather of respect, as they provide him with an honorable means of supporting life,” wrote Pope Leo XIII.

“It is shameful and inhuman, however, to use men as things for gain and to put no more value on them than what they are worth in muscle and energy.”

St. John Paul II in his encyclical Laborem exercens likewise discussed the modern situations of abuse that undermine the dignity of human work.

“Labor takes precedence over capital … People are more important than things,” he wrote.

As Catholics, it is good to be reminded of the two encyclicals, especially on Labor Day.

The Philippines’ gross domestic product (GDP) plummeted to minus 9.5 percent in 2020, the worst figure recorded since World War II due to community lockdowns to combat Covid-19 that closed business establishments. 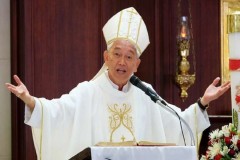 Philippine bishops under fire from one of their own NAGKAISA labor coalition said more than 20 million workers were affected by mass layoffs and retrenchment. There was also no mass hiring of new graduates.

Many blame President Rodrigo Duterte’s mismanagement of the pandemic for causing an international debt of an estimated 13.7 trillion pesos (US$285.4 billion).

“The previous hope that workers saw in Duterte has just faded. It returned to half a decade of failure and pain, which is most clear in this period of pandemic. We don’t see any more hope for change taking place in the remaining few months of Duterte in the presidency,” said coalition leader and lawyer Sonny Matula.

Many employers have also resorted to terminating employees to cut production costs.

Prices of basic commodities remain steep with an inflation rate of 4.7 percent. Duterte’s promise of giving families financial aid of 5,000 to 8,000 pesos ($100-160) has not materialized for every family. Many have not received one peso.

Even the healthcare system is on the brink of collapse.

“As of April 27, only 1.81 million Filipinos had received the first dose of the [coronavirus] vaccine and only 247,000 among them, or equivalent to 0.2 percent of the population, were fully vaccinated,” Matula said.

This Labor Day, despite our dire situation, workers will continue to act and fight

A factory worker in Manila said many rank-and-file employees were terminated based on tardiness and absences due to lack of public transport.

“They blame us for being tardy and for being absent. But we do not have private cars to go to work. We simply rely on public transport whose operation the government had suspended during the lockdowns,” said Anthony Macaraig, who works in a publishing house.

Despite fading hope, Filipino workers have no choice but to fight.

“This Labor Day, despite our dire situation, workers will continue to act and fight. Given the ongoing struggle, we only want to ensure the safety of workers and a better future for the working class and the entire nation,” Matula said.

What is there to celebrate on Labor Day? Every worker is called on to have faith even in the worst of times. St. Joseph was a man possessed of unwavering faith and utmost trust in God’s providence.

The Gospels did not quote him in Scriptures. Yet he was a man of action fulfilling God’s will in the ordinary days of his life as a laborer, as a humble Father of Jesus. Perhaps through the example of St. Joseph, our tired workers can draw strength.