Lay and religious women gather in Quezon City on March 7, even of the International Women's Day observance, to call for "just peace" and an end to violence against women. (Photo by Jimmy Domingo)

Women in the Philippines were getting free train and boat rides on March 8, but activist women's groups laughed it off and marched in Manila against "misogyny and government policies that promote violence.”

They demanded a US$15 minimum daily wage for all workers, saying that women workers have been receiving lower wages compared to their male counterparts.

"Women workers face more discrimination in the workplace because of their gender, and much still has to be done to level the playing field," said Victoria Mirando, vice chairwoman for women's affairs of the May 1st Movement, a labor group.

She said setting a national minimum wage of about US$15 "can be a good first step towards alleviating the poverty of millions of working women and … their families."

"This has to be remedied if any genuine progress is to take place in this country."

Force to be reckoned with

Another part of the observance of International Women's Day was a declaration by several women's groups that they are "a force to be reckoned with" in upcoming elections in May.

"Women have the power to make or break the results of the elections. We must recognize and make use of that power to send in people who genuinely press for a women’s agenda in the government," said Jojo Guan, head of the Center for Women's Resources.

Guan noted that during 2016 elections, the female turnout of 22.9 million comprised 81.6 percent of female registered voters and 51.6 percent of the whole voter turnout. 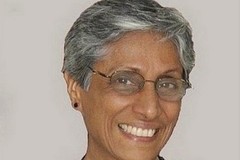 She said, however, that women's votes "did not fully translate into the fulfillment of a women’s agenda."

"This misogynistic and sexist government has not only left women behind, but it also added more burden on women," Guan said, citing the imposition of higher taxes in recent years that has affected the economic situation of many families.

She also noted that since President Duterte came to power "women have had to endure unabated misogynist and sexist attacks."

Guan said Duterte’s "low regard for women’s human rights has been translated into various forms of violence against women."

According to the Center for Women's Resources, at least 59 policemen have been involved in 35 cases of violence against women since 2016. Of these cases, 18 were rape cases while seven were "acts of lasciviousness."

Teachers and students of tribal schools in Mindanao, where atrocities against women have been reported during military operations, marked International Women’s Day by paying tribute to tribal women leaders, teachers, and female human rights defenders.

"We pay tribute to women tribal leaders who fight against plunderers in their ancestral lands, who defend [tribal] schools and the right to education of [tribal] children," said Rius Valle of the Save Our Schools Mindanao Network.

The group also called for the release of volunteer teacher, Jolita Tolino, who was arrested in 2017, allegedly for murder, by the military. They also called for justice for tribal women killed by suspected military agents.

Women at the forefront of peoples' struggles

In a joint statement, several women's groups said they affirm the role of women “at the forefront of women's and peoples' struggles."

"Through our mass actions, public gatherings, and different forms of protest, we affirm our continuing fight against forces that set us back in our hard-won struggles," read the statement.

"Forces of patriarchy, of misogyny, as embodied by Duterte himself, his government, and apparatuses of the state" threaten women, they said.

The women said they will "press forward as women" to end the "government’s misogyny and violence against women."

International Women's Day is celebrated on March 8 every year and has become a focal point in the movement for women's rights.

In the Philippines, the day is highlighted by protest marches in major cities.