McDonald Worley, a lawyer representing alleged victims of clergy sex abuse in the central Philippines, speaks to the media on March 20 after a visit to the families of the alleged victims. (Photo by Ronald Reyes)

A group of children in the central Philippines who claim an American priest sexually abused them are set to sue the alleged perpetrator and a diocese in the United States for damages.

McDonald Worley, a lawyer from Texas who represents the victims, told ucanews.com that testimonies and evidence are being gathered for the filing of a civil suit against Father Kenneth Hendricks and a "Catholic church in Ohio."

The lawyer did not specify which diocese or archdiocese in the state would be sued.

Philippine police, immigration officials and U.S. Homeland Security agents arrested Father Kenneth Bernard Hendricks in the central Philippine province of Biliran on Dec. 5, last year, over the alleged abuse of at least seven children over the past 40 years.

Authorities, however believe there could be at least 50 unreported cases.

Warrants for the arrest of the priest were also issued by a Philippine court for several counts of alleged sex abuse of minors.

Bishop Rex Ramirez of Naval Diocese in Biliran, however, said he is still waiting to hear what happens next in the case against Father Hendricks.

"We don’t have any latest news except that he is in prison and that he has a lawyer," the prelate told ucanews.com.

"It is still not clear to us because there has been no trial yet, so we will wait to know more," said Bishop Ramirez, adding that the case is "a trial not only for [the priest], but for the Church and for the diocese too." Church must answer for child abuse 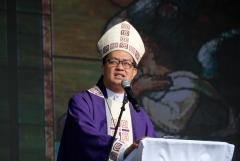 Worley said the civil case he will file on behalf of the alleged victims is separate from the criminal cases filed by the Philippine government.

"When someone gets hurt, I work on the compensation," the lawyer said.

Worley, who is in the Philippines to meet with the alleged victims, expressed confidence that he has an "airtight case" against the priest.

He said the local church in the United States should step forward and have a fund ready should they decide to pay the victims.

"There is a system failure," he said. "They need to have policies and procedures in place so this [abuse] does not happen," added Worley.

"They knew something was going on and they did nothing about it. They did not stop it," said the lawyer who visited the province of Biliran where Father Hendricks worked for about four decades.

"I think we have a lot of witnesses," he said, adding that he had talked with the parents of the victims.

The Archdiocese of Cincinnati has issued a statement disowning Father Hendricks, saying the priest "is not, nor has ever been, a priest" in the archdiocese.

"He has never had any assignment from the Archdiocese of Cincinnati," read the statement.

The archdiocese, however, admitted that Father Hendricks is listed on its website as a missionary serving in Asia.

Father Hendricks was one of about 75 missionaries from Ohio who received financial support from the mission office of the archdiocese.

The archdiocese, however, said none of those who received support worked for or took direction from the archdiocese.

It also said "the abuse of children or any vulnerable person is abhorrent and needs to be prosecuted."

The Philippines is Asia's biggest Catholic country and has also seen sexual abuse charges leveled against its clergy.

In 2002, Philippine Church leaders issued an apology for cases that included adultery, homosexuality and child abuse by 200 priests over the previous 20 years.

The following year, at least 34 priests were suspended in a sex abuse scandal involving the sexual harassment of women.