As she got ready to take the board exams, I noticed my granddaughter wearing black. I asked her why. “This is in solidarity with our fellow examinees who were hit by the recent Typhoon Ulysses,” she said

Curious, I sought an explanation. About 100 examinees were due to take the exams in Tuguegarao City. The area was severely flooded, with aerial photos showing many houses submerged to rooftop level as trapped residents waited on rooftops to be rescued.

The typhoon, also known as Vamco, hit the Philippines on Nov. 11-12 and some areas were inaccessible days later because of landslides and floods. The board takers from the flooded areas (not only from Tuguegarao but also from Marikina, Rizal and other areas severely affected by the flooding) requested a seven-day postponement of the exam.

The other examinees who were spared the wrath of Ulysses wholeheartedly agreed to the request. They believed this was the least they could do to help their co-examinees, sacrificing their own convenience of taking the exams as scheduled.

“We are batch 2020. No one should be left behind,” my granddaughter said. Instead of considering the students’ plea, the Professional Regulation Commission (PRC) canceled the Nov. 15-16 board exams in Tuguegarao City but proceeded with the schedule for the rest of the testing venues, citing access and connectivity difficulties in Tuguegarao. We do not want to discuss the merits of the PRC decision or what factors were taken into consideration.

But what impacted me is the charity in the hearts of the young doctors, selflessly setting aside the expediency and suitability of their own situation to favor those who needed their support. Many of those who took the exams wore black to show their solidarity.

The same impact this solidarity had on me was brought about within the day by a petition by students from Ateneo de Manila University.

The petition, initially signed by a few students and later gaining support from teacher organizations and students from other universities, announced that they were going on strike if their demands were unheeded. Among others, the demands were for “accountability on the part of the national government for their criminally negligent response to both the Covid-19 pandemic and, more recently, typhoon disaster relief response.”

The demand was for “a response from our national leaders to help and address the immediate needs of our countrymen.” These included free Covid-19 mass testing; cessation of military-centric solutions to medical problems; stemming the spread of the pandemic; provision of constant access to clean food assistance, nutritional support, water supplies and sanitation facilities, especially to those directly affected by the calamities; guaranteeing the safety, support and funding of local health workers; provision of decent temporary shelter arrangements and evacuation centers; and provision of assistance and decent livelihood opportunities.

Concretely, the pledge was “to withhold the submission of any school requirements until the national government heeds the people’s demands for proper calamity aid and pandemic response.” The same group pledged to “participate in relief operation efforts and initiatives directed at helping the victims of Typhoon Quinta, Super Typhoon Rolly, Typhoon Ulysses and the Covid-19 pandemic.” 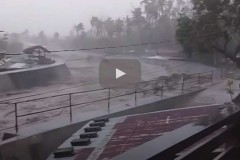 When I asked one of the petitioners what urged them to make the petition, she candidly responded: “I could no longer pretend I did not see the anguish of the others who could not study because they were handicapped by poverty vis-a-vis no aid from government, within the Covid context. It would not be right for me to close my eyes because I believe no student should be left behind.”

This petitioner, an A student who enjoys a scholarship and the complete support of an extended family, preferred to follow the heart and conscience of a true Christian by choosing to fast.

“Is not this the kind of fasting I have chosen: to loosen the chains of injustice and untie the cords of the yoke, to set the oppressed free and break every yoke? Is it not to share your food with the hungry and to provide the poor wanderer with shelter — when you see the naked, to clothe them, and not to turn away from your own flesh and blood? Then your light will break forth like the dawn, and your healing will quickly appear; then your righteousness will go before you, and the glory of the LORD will be your rear guard.” (Isaiah 58:6-8)

Whether it is as simple as wearing black or as complex and daring as signing a petition, these two incidents are responses to Pope Francis’ call. “Dear young people, please don’t be observers of life but get involved. Jesus did not remain an observer but he immersed himself. Don’t be observers but immerse yourself in the reality of life as Jesus did.”