A policeman wearing a face mask stands guard at a checkpoint in Manila on March 25 after the Philippine government imposed an enhanced quarantine as a preventative measure against the coronavirus. (Photo: Ted Aljibe/AFP)

A Philippine lawmaker has come under fire after accompanying his pregnant wife to a Manila hospital despite showing early symptoms of Covid-19.

Senator Aquilino “Koko” Pimentel III announced on March 25 that he had tested positive for the virus.

The legislator said he took his wife to the hospital on March 24 because she was to give birth the following day. He also added that there was no confirmation that he was Covid positive until he received a call from the same hospital.

However, Pimentel said he had a body temperature of 38 degrees-Celsius on March 18. He also said he had a sore throat but his vital signs were normal. He decided to be tested for Covid-19 on March 20.

His actions sparked outrage, with many criticizing the senator’s “poor judgment” for violating quarantine rules.

“As a result, a number of our nurses and doctors may need to be quarantined, which will further deplete the dwindling workforce of the hospital. The entire delivery room complex will have to undergo decontamination and disinfection before it can be used.

“We denounce the irresponsible and reckless act of the senator. He added to the burden of a hospital trying to respond in its most competent and aggressive manner to cope with the daunting challenges of this Covid-19 outbreak.” 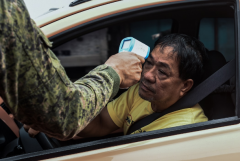 “I am sorry that it happened but it’s a hospital scenario. I had no indication that my result would be positive … I was an expectant father who accompanied an expectant mother. I did not have a cough or fever,” Pimentel said in a TV interview.

The public, however, were not very forgiving. Photos of the senator were being circulated online comparing Pimentel to Dorothy Espejo, a 69-year-old homeless woman facing multiple charges for resisting and violating quarantine rules.

Meanwhile, three Jesuit priests have joined health workers on the front line administering the sacraments to the sick and the dying at the Philippine General Hospital (PGH), the country’s largest state hospital.

PGH is under the chaplaincy of the Jesuit Order, which has been hearing confessions, anointing the sick and administering the last rites at bedsides.

As of March 25, the Philippines had recorded 636 Covid-19 cases with 38 deaths, according to government figures.