A fisherman carries an image of the Child Jesus to his boat during the annual fluvial parade in the southern Philippine city of General Santos on Jan. 15. (Photo by Bong Sarmiento)

Fishermen held a fluvial procession in the southern Philippine city of General Santos in Mindanao to honor the Santo Nino, or the Child Jesus, whose feast is being celebrated in the country this week.

At least 200 fishing vessels of all sizes took part the procession, an annual event that started 40 years ago to show thanks to the Lord for the bounty people get from the sea.

The city of General Santos, a predominantly Christian urban center in the southern region of Mindanao, is known as the "Tuna Capital of the Philippines."

An estimated 20,000 people depend on the tuna industry, which generates annual export earnings of about US$350 million, for a living.

In the village of Bula, where tuna fishing started in the region, people have chosen the Child Jesus as their patron and whose feast is celebrated every January.

An image of the Santo Nino is placed on board a boat for the parade every year.

What started as a village tradition has evolved into a week-long celebration that includes the fishermen's parade.

Fishing magnate Marfenio Tan, an organizer of the event, said the parade attracts visitors from afar.

"Devotees flocked to city to show their gratitude to God for blessings they received," said Tan. 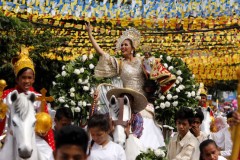