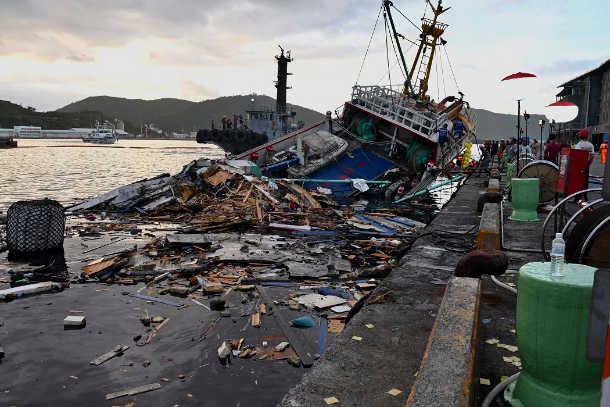 The wreckage of a fishing boat is seen after a bridge collapsed in Suao in Taiwan on Oct. 1. (Picture by Sam Yeh/AFP)

The Philippine bishops' conference has urged Filipino priests in Taiwan to assist victims and families of a bridge collapse in a fishing harbor in Suao on the east coast of the island.

"We urged our priests there to give urgent assistance and services," said Bishop Ruperto Santos of Balanga, chairman of the conference’s Episcopal Commission on Migrants and Itinerant People.

The prelate expressed condolences to the families of the Filipino fishermen who died in the tragedy and assured them of his prayers. Bishop Santos appealed to the Philippines' Foreign Affairs Department to look into the incident and help the victims attain justice. "We appeal to our officials for a thorough investigation and necessary justice," he said. The Labor Department said it was working to repatriate the remains of two Filipino fishermen known to have died in the accident. The department said rescue and retrieval operations were still ongoing following the collapse of the 140-meter-long single-arch bridge. Philippine Labor Secretary Silvestre Bello III said "all possible assistance" will be given to the families of the Filipinos who died and scholarships will be given to their children. Taiwanese authorities are investigating the incident. The bridge, built in 1998, was well within its estimated 50-year lifespan. Taiwan has a huge fishing industry that employs low-paid migrant workers from countries such as the Philippines, Indonesia, and Vietnam.