Dictator who imposed martial law does not deserve place in Manila cemetery, he says 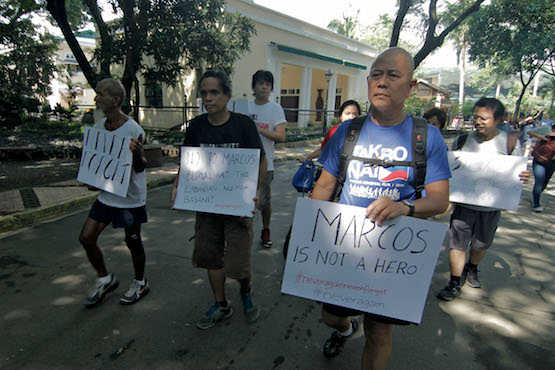 A Catholic priest led a protest run in Manila on July 17 against a plan to allow former Philippine dictator Ferdinand Marcos to be interred in a cemetery for heroes in Manila.

Franciscan Father Robert Reyes, known for his penchant to run for a cause, said Filipinos should "rise up, come out, and not be afraid to stand for the truth" and oppose the plan.

"A dictator is not a hero and should not be given the honor to lie with heroes," said Father Reyes who is also known as the "running priest."

The body of the late dictator, who died in exile in the United States in 1989, lies in a glass coffin at a mausoleum in his hometown province of Ilocos Norte.

President Rodrigo Duterte, a close friend of Marcos' son Ferdinand Jr., earlier said the late president should be interred at the cemetery because the issue has long divided the country.

"I will allow the burial of [Marcos] … not because he is a hero but because he was a Filipino soldier," Duterte said even before he became president in May.

Marcos, who ruled as a dictator for 14 years, died three years after a popular revolt ousted him from power in 1986.

Since his death, the Marcos family has pushed for a hero's burial for the late leader, citing his accomplishments as a former soldier and president.

Father Reyes, however, lamented that Duterte is "twisting history" when he entertained the appeal from the Marcos family.

"President Duterte, you should respect history, you cannot manipulate history. The worst thing that ever happened to the Philippines is Marcos," said the  priest.

He urged the president not to be part of the "crime of deceiving the people and accepting the lies of the Marcoses."

The priest said burying Marcos in the cemetery is an insult to the thousands of victims of martial law whose families continue to seek justice from the Marcos family.

Families and friends of martial law victims also piled stones with the names of their loved ones on the proposed burial site for the late president.

"We will not stop our opposition, and if need be we will barricade the cemetery," said the priest who urged the people to "sweat it out and make sacrifices for justice."

Father Reyes urged the Marcos family to give their patriarch a "proper" burial elsewhere. "I might even join you and pray with you," he said.