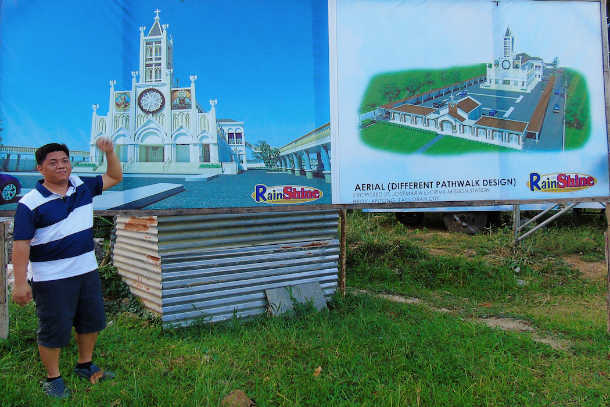 Father Kim Margallo, pastor of the St. Josemaria Escriva mission station church in the central Philippine city of Tacloban, stands at the site where he is building a church. (Photo supplied)

He placed his brush gently on the table after making some finishing touches to his latest "masterpiece," an oil painting of Jesus in agony.

The priest has been painting and selling his artwork in order to build a church.

"It's a tall order," said Father Kim Margallo, pastor of the St. Josemaria Escriva mission station church in the central Philippine city of Tacloban. "I have to use my creativity to achieve what we need to achieve." To finish the mission church building, the 35-year-old priest needs to raise at least US$3.8 million. "The costly part is the detail, which is about 60 percent of the total amount," he said.The station church will feature a columbary, which will serve as a "dignified and cost-effective Catholic alternative to casket burial."The church is being built on a one-hectare plot donated by the landowner."This will become a landmark, a shrine," said Father Margallo, who plans to ask for a "first class relic" of the church's patron saint.The immediate concern of the priest, however, is money to build his church. "We have to find ways of raising the cash," he said.That's why he turned to art. "Donors can give a particular amount, then we give them a token," said the priest. The token of course is his artwork."Sometimes we also auction off the paintings," he told ucanews.com. Art buyers and dealers can also have "pre-order" oil paintings.Father Margallo said the painting project only started in July. Artists paint under the trees to finish works that are sold to raise funds for the building of the church. (Photo supplied)

To help him, he has recruited two local artists, Ernesto Kardante and Kim Clinton Gonzales, who painted the walls and ceiling of the adoration chapel, the first to be built on the property, which now serves as a "catechetical chapel."

"Anyone can come here to reflect and relax," said Father Margallo.He said entering the chapel is a "journey of faith" because one is greeted by artwork depicting various scenes from the Bible.Images based on the story of Adam and Eve, the crucifixion of Jesus, images of the "militant, suffering and triumphant church," and even of heaven can be found inside the chapel.There are also images of saints who they can look up to and "whose lives they can admire," said the priest.Father Margallo also wants to attract young people into going to church through the paintings. "With our simple pictures, we invite the youth," he said. "We evangelize to the millennials ... They are more on visuals." He said early Christians did not know how to read. "They were taught through paintings. Now, we are bringing this early form of evangelization back," said Father Margallo.The priest said he knows it will be a long journey to finish his church, but he said he would persevere. His assignment at the mission station lasts only for three years. "I gave myself a timeline. Hopefully, I can build the church," he said."Regardless of whether I can finish it or not within three years, I have to finish with the basic structure," he said. With the help of his art, of course.