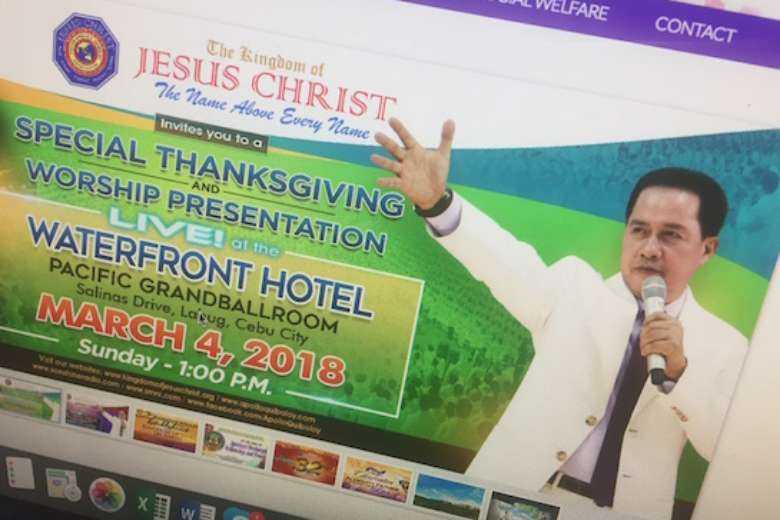 Pastor Apollo Quiboloy, founder and leader of the Kingdom of Jesus Christ, is pictured on the religious group's website.

A Filipino pastor claiming to be the appointed son of God has blamed his accusers for the global spread of the new Covid-19 variant Omicron.

Pastor Apollo Quiboloy, founder of the Kingdom of Jesus Christ movement, on Nov. 28 warned Christians and non-believers to stop “persecuting” him for sexual charges or else the world would suffer more from the pandemic.

"The Delta virus variant of Covid-19 is only an introduction. If you keep on hurting, persecuting and harming the appointed son and the kingdom, you will see much worse than the Omicron variant," said Pastor Quiboloy at his Sunday service.

He claimed that he, the appointed son of God, would not suffer by the “persecuting, prosecuting and maligning” of his accusers because nations would face a deadlier consequence.

He was referring to pending cases against him for sex trafficking filed in the US in early November. The 74-year-old is also charged with coercing girls and young women to have sex with him by threatening they would go to hell if they refused him sexual pleasure.

Pastor Quiboloy, who is a friend and ally of President Rodrigo Duterte, said US prosecutors must withdraw the cases because the “father in heaven” would not allow him to be persecuted and prosecuted for sexual charges.

"I told you, I'm telling you the truth, the day of the Lord is here. Do not ever, ever play a joke or continue to pursue the prosecution of the appointed son because the father in heaven has already declared through the appointed son, no one can escape this," he said in his homily.

"The way you treated the appointed son here is the way this world is going to receive its judgment."

He claimed the dismissal of cases against him was key to freeing the world from the wrath of the coronavirus pandemic. "You want this to stop? Stop persecuting, prosecuting, maligning and falsely accusing the appointed son," he said.

The pastor is charged in the US with recruiting young girls as his personal assistants to give him massages and have sex with him. Charges in the Philippine courts included rape, child abuse and human trafficking, but they were dismissed in 2019 due to lack of evidence.

The pastor often claims to have supernatural powers and in 2019 claimed to have stopped an earthquake in the Mindanao region by simply yelling “Stop!”