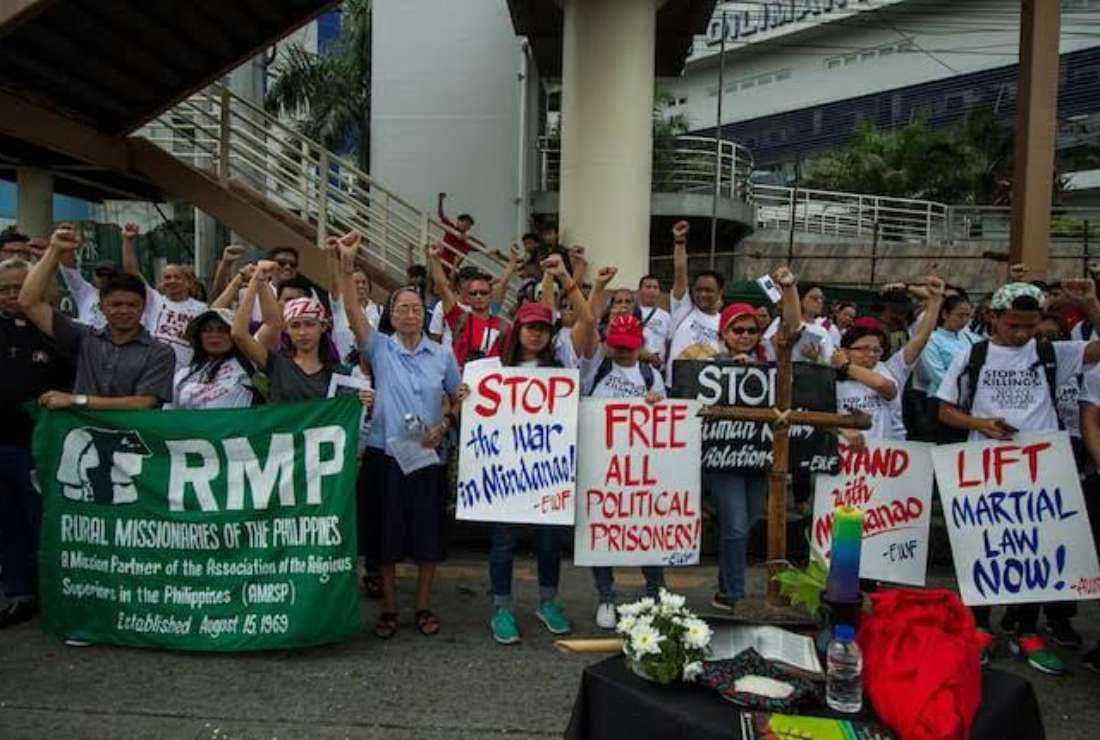 Filipino nuns join a protest rally in Manila against the declaration of martial law in the Mindanao region in 2017 by former President Rodrigo Duterte. (Photo supplied)

A criminal case has been filed against 16 people, including several nuns, for allegedly financing terrorists and violating the Philippines' anti-terrorism law.

It was filed by the Justice Department on Aug. 15 with a trial court in Iligan City in Mindanao, accusing them of financing the Communist Party of the Philippines (CPP) and its armed wing, the New People's Army (NPA), which is branded a terrorist organization by the Philippine government.

The charges against the nuns, whose number and identities remain undisclosed, and the others, come days after the state-run Commission on the Filipino Language banned five textbooks for allegedly encouraging terrorism.

"The anti-terrorism law defines and penalizes terrorism financing as giving financial aid such as donations, which also include the transfer of any property or funds, or financial services and other related services, to an individual or group designated as a terrorist by the government,” Justice Department lawyer Mico Clavano told reporters on Aug. 15.

Clavano said that if the court agrees with the Justice Department, it can issue an arrest warrant against the accused, including the nuns.

“The charge is terror financing, and the law provides that the offense is a nonbailable crime, they would go to jail while the trial is ongoing… It is what the law says,” Clavano added.

"They were not given an opportunity to defend themselves"

The Justice Department said that the charges were based on the testimonies of witnesses, namely two former members of the New People’s Army.

“According to the witnesses, the sisters ... prepare a proposal to be presented to foreign funders. These foreign funders donate and give money to finance projects of terrorist groups,” the Justice Department claimed.

Human rights groups, however, said the Justice Department railroaded the filing of the case in secrecy before the accused could defend themselves.

“Some cases take months or even years but the case against the sisters took only weeks. They were not given an opportunity to defend themselves because authorities knew they were not involved in any crime,” said Samahang Layko ng Pilipinas, a Catholic lay group in the Philippines.

The Justice Department, however, said the sisters were given the opportunity but did not do so.

Student Christian Movement of the Philippines, an ecumenical youth group, said the Justice Department should present proof of whether the complaint was “intentionally” made known to the sisters or whether it was hidden so the government could have a swift resolution.

“The Department of Justice and Secretary[Jonvic] Remulla acted like Pilate’s court in bringing trumped-up charges against Church people who have a veritable record in helping peasants in the countryside,” the group said in a statement.

Members of the Church have often been accused by the government of helping communist rebels through their mission work.

The Rural Missionaries of the Philippines is a Church-based national organization, comprising priests and lay persons. The group empowers farmers, fisher-folk and indigenous peoples, and educates them on their rights.

Because of their advocacy, they have been "red-tagged" by the Philippine government.

Red-tagging, also known as red-baiting, is the malicious labeling of individuals or groups as “terrorists” or “communists” for criticizing the government. This malpractice has been used by successive governments in the Philippines to crack down on the NPA since 1969.

The government defends red-tagging as part of counter-insurgency measures.

Activists, journalists, politicians, and various organizations have also been subjected to the same treatment for allegedly supporting the NPA.