Sister Crescencia "Cres" Lucero of the Franciscan Sisters of the Immaculate Conception of the Holy Mother of God died in hospital on May 15 following a stroke while attending a human rights meeting in Indonesia.

The 77-year-old nun underwent surgery for a cerebral hemorrhage on May 9 but failed to recover.

Sister Lucero was head of the Justice, Peace and Integrity of Creation Commission of the Association of Major Religious Superiors in the Philippines.

She headed the Task Force Detainees of the Philippines in the 1980s and was re-elected as co-chairwoman of the organization in 2016.

She served as a board member of the Philippine-Misereor Partnership Inc., a social development network of people’s organizations, faith-based groups and Misereor, the overseas development agency of the Catholic Church in Germany.

At the time of her death, Sister Lucero was a member of the executive board of the Asian Forum for Human Rights and Development, previously known as Forum-Asia, an alliance of 58 human rights organizations in 19 countries across Asia.

Loss to justice and peace movement

Human rights and church groups in the Philippines said her death was a great loss to country’s justice and peace movement. The sorry state of human rights in the Philippines 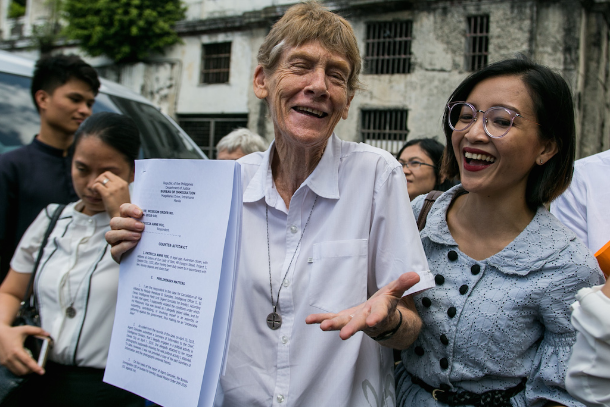 "In dark times like what we are experiencing now under a deteriorating human rights situation in the country, we need someone who will speak the truth," said Father Gariguez. "Sister Cres always did."

The Ecumenical Bishops’ Forum said Sister Lucero 's death "will be keenly felt by the ecumenical movement to which she had shared her faith and worked together with prophetic commitment for justice and peace and human dignity."

Rights activist Yolanda Esguerra said Sister Lucero "was one of the bravest women who touched the lives of many human rights victims and survivors of martial law" in the Philippines.

"I saw how she worked to make the world a better place for ordinary people deprived of their rights and justice," said Esguerra, national coordinator of the Philippine-Misereor Partnership Inc.

In a 2014 interview with ucanews.com, Sister Lucero said the years she spent in human rights work had made her stronger.

"But despite my optimism, there is a bothersome thought that I continuously struggle to push away," she said.

"I fear that the way things are going [in the country], there may be a chance that there will come a day when the Marcoses will once again be at the helm of power.

"God forbid. That is one nightmare I would never wish for anyone to go through."

The day before Sister Lucero died, one of the late dictator's children was elected to the Philippine Senate.