Sister Mary John Mananzan juggles life as nun with being a feminist activist, organizer and educator all rolled into one Share this article :
Benedictine Sister Mary John Mananzan is not your traditional religious nun in a habit. She's a feminist activist, an organizer, an intellectual, an educator, and a theologian, all at the same time. She's "incredibly complex" and "multifaceted," says a teacher at the Manila girls' school that Sister Mary John heads. Her office at the school, however, is "shockingly simple," adds the teacher. "There was a time when I was just nobody," says the 79-year-old nun from the Missionary Benedictine Sisters of Tutzing congregation. "Then I became a nun, and there was that day when I realized I was already a political activist," she says. When she returned to the Philippines after her graduate studies on Missiology and Systematic Theology in Germany in 1975, Sister Mary John said she had her "baptism of fire" in activism. It was a turbulent time for the country under the late dictator Ferdinand Marcos. "The country was facing its darkest days," recalls the nun.
Related News 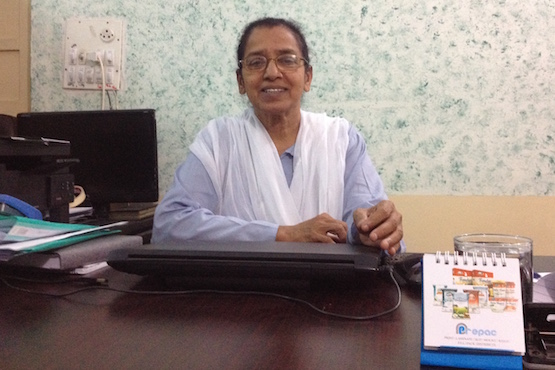 A phone call in the middle of the night brought Sister Mary John to the forefront of the protest movement.  One chilly October night, nuns and priests congregated outside a liquor factory to show their solidarity with striking workers. "The [police] came and began hitting workers," Sister Mary John says. She still recalls how they, nuns and priests, linked arms to protect the protesters. The strike resulted in the arrest of some 600 workers. At least two nuns and a priest were hurt. The protest was the first open defiance of Marcos' martial law, and it was also Sister Mary John's "first time experiencing military brutality." She says it opened her mind to live the church's "option for the poor" teaching. "It was a defining moment that shaped me as a rights activist," she says. She later joined in the establishment of the group "Friends of the Workers" that encourages church people to immerse themselves in factories. "It's too late if we will just respond during strikes. We should be there even before it happens," says Sister Mary John. She started to enter "a world full of contradictions and challenges in places where people are oppressed."   From activist to feminist Through the years, Sister Mary John has become one of the faces of the women's rights movement and activism in the Philippines. A case of abuse on a woman political detainee by soldiers made the then young nun to realize that "fighting for women's rights is also fighting for political and civil rights." The woman political detainee's story inspired Sister Mary John and other women's rights advocates to establish Filipina, a women's movement. The Benedictine nun also became instrumental in the formation of the National Organization of Women Religious of the Philippines, a network of religious nuns. She jokes that they had a "very high recruitment standard" during those days. A nun could only join the organization if she was "willing to work with communists," says Sister Mary John. "The communists were already in the frontline of the struggle for national liberation, why get rid of them?" she says. "The religious sister must accept the … struggle," she adds. Her organization was able to enlist 200 nuns from various religious congregations. Sister Mary John's growing activism caught the attention of leaders of the underground movement, who asked the nun in 1982 to establish an institution that would empower women. First the Center for Women's Resources was established, and in 1984, at the height of the dictatorship, the women's group Gabriela was established to consolidate women's rights groups. Sister Mary John led the women's movement for 18 years from 1986 to 2004, before she became prioress of her Philippine congregation in 2004. The long and colorful life story of Sister Mary John started when she was 19 years old when she realized she wanted to be a nun. Through the years, she served as president of the all girls' school St. Scholastica's College in Manila, she established the Institute for Women Studies, built a hospital, authored books, obtained a doctorate in linguistic philosophy, summa cum laude, at the Pontifical Gregorian University in Rome. She has always been vocal about her political beliefs. She sees no contradiction between her faith and her politics. "There is no contradiction. I exist. I am a nun and an activist," she says. "It is my faith that is urging me to do this. Christ is an option for the poor," she says, adding that her inspiration is Jesus, "not Marx."   "If Jesus was here with us today, he would be more likely with us in the streets," says the nun. Sister Mary John, however, admits that the Catholic Church is not ready to open its doors "to the real meaning of gender equality." "The church is conservative," she says. "Of course they will say 'men and women are equal.' Yes, theoretically. But we are not equal within the church," says Sister Mary John. For the nun who dedicated almost her entire life to the church and to the advancement of freedom, "it's a long way to go in terms of women's rights." She says it is still a long way to go "because abuses, discrimination, and gender-based exploitation still exist."