Moro and tribal people launch a signature campaign on Dec. 8 against extending martial law in the southern Philippine region of Mindanao. (Photo by Mark Saludes)

Muslim and tribal people launched a petition ahead of International Human Rights Day on Dec. 10 to express opposition against a government plan to extend martial law for another year in the southern Philippines.

The campaign aims to gather enough support as "proof of the people’s disgust" with military rule, which President Rodrigo Duterte declared in May last year in response to a terrorist attack on the city of Marawi.

The Philippine Congress has twice extended martial law in the region, which is in effect until Dec. 31. The military, however, wants martial law extended for another year.

Piya Macliing Malayao, spokeswoman of the Sandugo Movement of Moro and Indigenous Peoples alliance, said violence in Mindanao resulting from military rule "has gone too far."

"It has to stop," she said, adding that there was a "sudden spike" in human rights violations after the government implemented martial law.

Mayao's group says it has already documented at least 54 killings of tribal people since 2016, when Duterte came to power, 182 cases of illegal arrest and detention and 67 incidents of forced evacuations of tribal communities affecting about 3,000 individuals.

At the weekend, three Catholic bishops — Bishops Antonio Ledesma of Cagayan de Oro, Jose Colin Bagaforo of Kidapawan, and Dinualdo Gutierrez of Marbel — reiterated their support for the lifting of military rule in Mindanao.

"There is no need for martial law," said Archbishop Antonio Ledesma, adding that keeping peace and order in the region can be handled by authorities with "proper safeguards" for respecting human rights.

"It is about time we normalize everything," said Bishop Bagaforo. "Everyone in the government says peace and order is well-placed, so we end martial law."

Last week, Duterte asked Congress to extend martial law until the end of 2019, citing the "positive effect" it has supposedly had in "addressing rebellion." 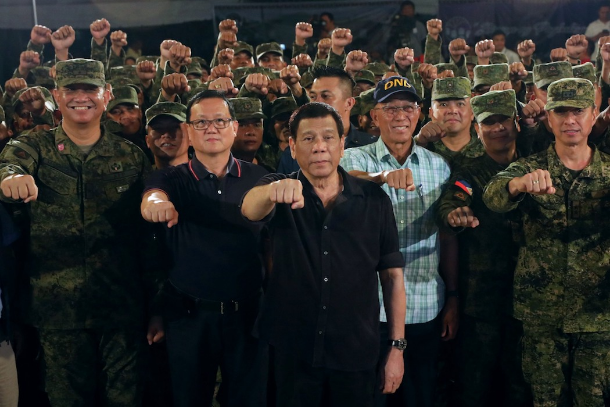 "If martial law only ignites violence and rights violations and makes people suffer, then the government has to immediately lift it," said the priest. He said authorities should "heed the cry of the poor and implement pro-people policies instead of a repressive and bloody military rule."

Jerome Succor Aba, chairman of the Muslim group Suara Bangsamoro, said the intention of martial law seems to be "to displace the Moro and tribal people from their lands."

He said the government is only using it and its counter-insurgency campaign as "an excuse to justify the occupation of tribal lands."

In July, about 1,600 tribal people in Lianga, Surigao del Sur province, left their mountain homes because of military operations in their communities.