President-elect called upon not to repeat abuses committed by his father and his predecessor, Rodrigo Duterte 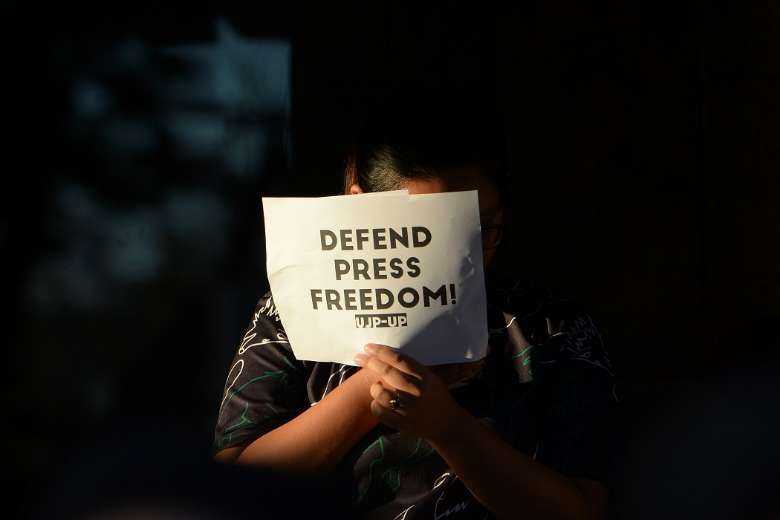 A student holds a placard during a protest at the state university grounds in Manila on Feb. 14, 2019, in support of Rappler CEO Maria Ressa, who was arrested a day earlier in a cyber libel case. Ressa was later convicted in a case that sparked international censure and allegations she had been targeted over her news site's criticism of President Rodrigo Duterte. (Photo: AFP)

The National Union of Journalists of the Philippines (NUJP) said on May 26 that it hoped the next president would not revisit the horrors experienced by media people during the martial law years imposed by his father, the late dictator Ferdinand Marcos Sr.

It also said the new president should do more to protect them in a country that was ranked the seventh most dangerous for journalists worldwide on the Global Impunity Index 2021 released by the Committee to Protect Journalists.

Many were murdered for exposing corruption within political circles, the NUJP said.

The union’s call came after Marcos Jr. vowed to combat corruption with the help of the media.

“We have to, at the very least, reduce the corrosive influence of corruption in government as a general rule … with the help of our friends from the media,” he told reporters on May 26.

“Although restored by the 1986 ouster of Marcos Sr., media freedom has deteriorated and the leadership of Rodrigo Duterte has seen increased attacks on journalists and independent media"

The NUJP said at least 25 journalists have been killed since President Rodrigo Duterte assumed office, not far off the 34 known to have been murdered during Marcos Sr.’s rule.

The journalist group said Marcos Jr. must assure Filipinos this worrying trend does not continue and that he will not restrict and regulate media coverage when it suits him.

“Although restored by the 1986 ouster of Marcos Sr., media freedom has deteriorated and the leadership of Rodrigo Duterte has seen increased attacks on journalists and independent media,” said the NUJP.

It was also referring to prosecutions of journalists like Nobel laureate and Rappler CEO Maria Ressa, convicted of cyber libel in 2020, and the shutdown of leading broadcaster ABS-CBN following criticism of Duterte’s administration.

The NUJP also cited the country’s poor ranking of 147th out of 180 countries on the latest World Press Freedom Index.

“The guarantee of media freedom must be implemented by enacting press freedom laws, establishing independent media councils, decriminalizing defamation, ending censorship and bans on the media, and stopping lawsuits,” it said.

It said having a strong media foundation was a mark of a strong democratic nation.

“Independent and fair elections are not only about freedom of choice and knowledge of how to vote but also about a participatory process in which voters engage in public debate and have adequate information about parties, policies, candidates and the electoral process itself. Therefore, the public needs credible information before making their choice,” the union said.

“In addition, the media acts to oversee the course of elections and maintain a transparent process. Thus, democratic elections should not ignore media freedom.”