The Nobel Peace Prize was today awarded to journalists Maria Ressa of the Philippines and Dmitry Muratov of Russia for their fight for freedom of expression in their countries.

The pair were honored "for their efforts to safeguard freedom of expression, which is a precondition for democracy and lasting peace," said Berit Reiss-Andersen, chairwoman of the Norwegian Nobel Committee."They are representatives of all journalists who stand up for this ideal in a world in which democracy and freedom of the press face increasingly adverse conditions."
Donate to UCA News with a small contribution of your choice
In 2012, Ressa, 58, co-founded Rappler, a digital media company for investigative journalism, which she still heads.Rappler has "focused critical attention on the Duterte regime's controversial, murderous anti-drug campaign," Reiss-Andersen said.Muratov, 59, has meanwhile defended freedom of speech in Russia for decades under increasingly challenging conditions.In 1993, he was one of the founders of the independent newspaper Novaya Gazeta, which has a "fundamentally critical attitude towards power," the committee said, and has been its editor-in-chief since 1995."Without freedom of expression and freedom of the press, it will be difficult to successfully promote fraternity between nations, disarmament and a better world order to succeed in our time," Reiss-Andersen said.

The winners of the prestigious prize, worth US$1.1 million, were announced at the Norwegian Nobel Institute in Oslo. They were chosen out of 329 candidates. 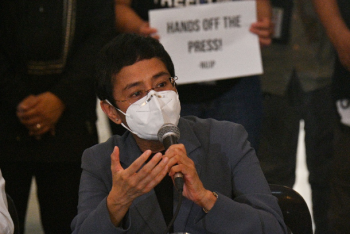