An angry husband (left) confronts a Catholic priest in San Fernando in the Philippines and accuses him of sleeping with his wife. (Photo: YouTube)

Video footage of an angry parishioner berating an “adulterous” priest for sleeping with his wife and then saying he could “keep her” has gone viral in the Philippines.

The incident uploaded on social media on May 6 took place in a hall in San Fernando in Pampanga province north of Manila.

The hall is believed to be within the church compound where the clergyman serves as the parish priest.

The video showed the irate husband “literally” giving his wife away to the priest  along with two pieces of luggage containing her personal belongings.

He also smashed their family portrait in front of the clergyman who was not named.

“Father, into thy hands, I give you my wife … You destroyed my family ... You told us in your homilies, ‘Thou shall not covet thy neighbor’s wife,” the footage shows the aggrieved husband telling the priest.

Thank you for destroying too our trust in God

Another man, believed to be the husband's son, who was taking the video, approached the priest to thank him for “destroying” his family.

The same person told the priest he had been reported to his superiors and that the family was being supported by other clergymen in the diocese.

“You need to be removed [from the priesthood]. We have already reported you, so you better prepare. You are already being investigated,” the person added. 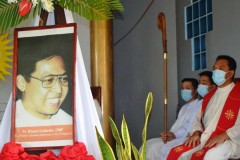 That was the point at which the husband smashed the family portrait by punching it.

A woman was heard begging the family not to hurt the priest.

“We are not going to hurt him. We are just outpouring our feelings. A priest f****ng a mother?” one of the husband’s other sons responded.

It was not clear when the footage was taken but San Fernando Archdiocese later announced on May 6 that it had suspended the priest from celebrating Mass and that the diocese was investigating.

“I want to assure the faithful that the Officer of the Roman Catholic Archbishop of San Fernando [RCASF] continues to reach out to the parties concerned … with the ultimate objective of seeking the truth and offering guidance and support,” Archbishop Florentino Lavarias of San Fernando said in a written statement on May 7.

The archbishop also assured Catholics that church authorities would take appropriate action on the filing of a formal complaint.

“The RCASF reserves the right to take appropriate action as a more thorough investigation progresses after the receipt of a formal complaint from the concerned party,” he said.