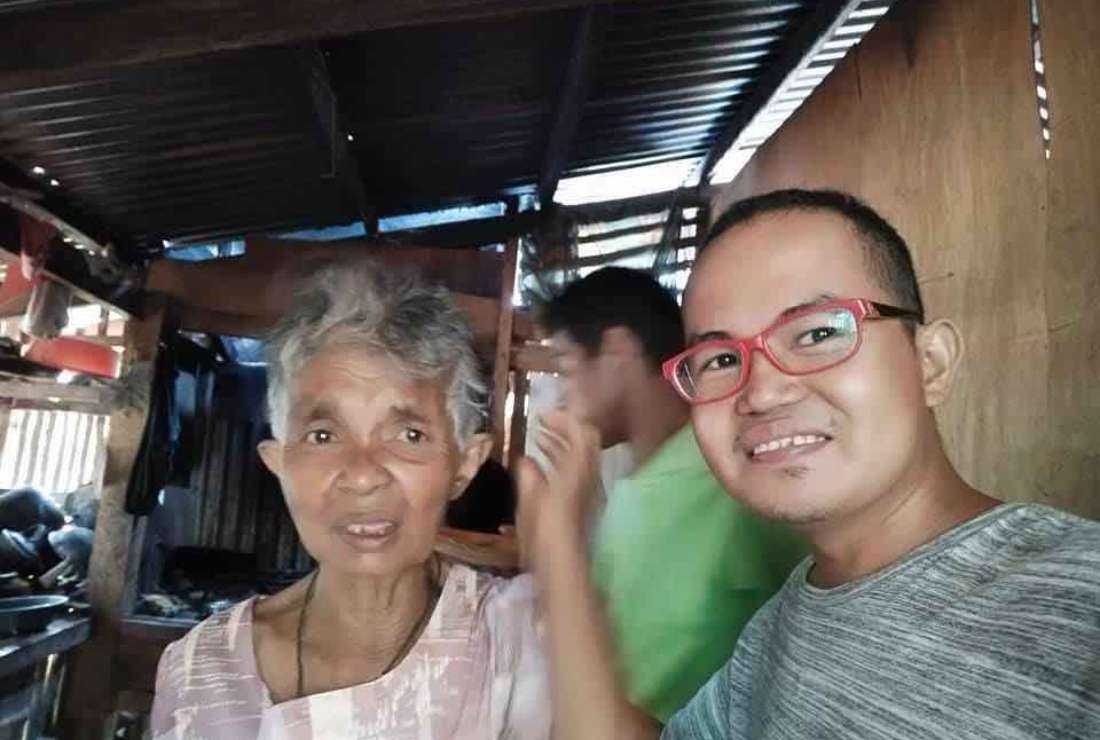 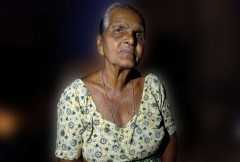 It was still the wee hours when Edna, a single mother, prepared to leave her home in the Philippines. Her sons — Peter, 16, and Chris, 4 — were up to say goodbye not knowing where their mother was going or when she will be able to return.

The 38-year-old was returning to Saudi Arabia to work as a domestic helper. It’s her second time. The first did not turn out well but it paid her loans and sent her sons to school.

“Never mind, what’s important is that I had something to send to my family,” Edna told UCA News.

For every domestic helper that leaves the country, there is always a grandmother or another family member that takes care of the children left behind.

“Nanay Marciana” [Mommy Marciana], as Edna’s sons call her, takes care and raises them like her own.

When Edna first left the country in 2000, Marciana not only assumed the role of Peter’s mother but also his father, earning a living by selling rice cakes in their community. There is also Chris now.

It is quite evident that this is a difficult choice for the mother inside her; to be away from her children for so long in a foreign country with an entirely different culture.

There are millions of Marcianas caring for children of these overseas Filipino workers. They, together with millions of Filipina mothers, endure the pain on the basis of their unflinching faith in this Catholic-dominated country.

Marciana, 67, runs a small sari-sari or variety store in Cavite province, south of Manila while also ensuring her grandchildren are cared for well.

Ivi Escueta, 42, a Filipina employee, poses for a picture at the supermarket where she works at the Jumeirah Beach Residence, in the Gulf Emirate of Dubai on April 22, 2020 during the Covid-19 coronavirus pandemic. (Photo: AFP)

She may not be able to give them the best material possessions and Philippine society may call them “hoi polloi” or the masses, but the grandmother ensures they grow up in the Catholic Church and adopt its values.

Marciana is a daily Mass goer and makes sure she takes along Peter and Chris.

“I always bring one of them to church when I have meetings because I want them to be good people. I want them to avoid vices when they grow up … these vices could prevent them from finishing school. This is not what their mother would want,” Marciana told UCA News.

She herself serves as Mass reader twice a week and Peter is now an altar boy in the parish. He also accompanies their parish priest in celebrating the Mass in far-flung communities.

Marciana has been instrumental in developing her older grandson’s commitment to serve the Mass.

“I remember when he was young he would have his eyes fixed on the priest. Back home he would even play with some biscuits, giving them to me and his younger brother as if he were a priest serving communion. So, I was not surprised when he wanted to be an altar server,” she says.

Although they live in a bamboo house, Marciana makes sure her daughter’s sons experience the warmth of having a mother around them.

She plays with them and also helps them with their homework and other school assignments.

But what Marciana takes pride in is being the first teacher of the faith for Edna’s two children. It is she who taught them how to pray.

“I taught them basic prayers like the Sign of the Cross, the Hail Mary, and the Glory Be so we could pray the rosary at night. Of course, the second child cannot speak very well yet but the first joins me enthusiastically in praying the rosary,” she added.

Marciana said they have a weekly “padasal” [prayer meeting] in their community where they pray to the image of the Our Lady of Perpetual Help every Wednesday.

Filipino women labourers play cards among boxes as they relax on their day off in Hong Kong on Feb 18, 2018. Every Sunday thousands of female workers from Indonesia and the Philippines gather in the downtown area to meet with friends and relax on their one day off. (Photo: AFP)

“I always pray for my daughter who works in the Middle East. I tell her children to do the same,” she says.

On Sundays, they all go to church together for Mass in the morning. After the Mass, Marciana and her grandchildren go to the park while waiting for their ration of rice and meat.

“Sunday is special because we cook meat. I do not cook meat every day because it is expensive. But every Sunday, I make it a point to buy the children’s favorite fried chicken,” she says.

Before they partake of the little they have, Marciana always makes sure Edna’s children remember her in prayers and pray that their mother has something to eat for the day.

But their strong faith does not spare them from the challenges that life poses.

There are times when Edna’s salary is delayed and Marciana is forced to borrow money from neighbors.

“It happens, especially when the children need something for their school studies or activities. We barely have enough to eat. But God is good and our neighbors don’t charge us any interest,” exclaims Marciana.

She recalls the time when the younger child had dengue fever and there were only a few hundred pesos left in her wallet.

The local health worker advised her to take him to the hospital but she had no money to pay the bills. Then her fellow lectors and commentators in the parish chipped in and gave her 5,000 pesos (US$100).

This made Marciana’s faith in God grow even stronger.

“I really believe in miracles. Sometimes they happen not like the way we think — say when Jesus turned water into wine or when He healed a blind man. Most times, miracles happen in ordinary situations. Yet we fail to see and recognize them,” she explained.

Marciana along with her daughter has been fighting life’s endless battles but all she wants for her family, especially the kids, is they grow up as good Christians.

Domestic work is an integral yet invisible fabric that supports the Philippine economy and society. But the worth of it all cannot be weighed in remittance money alone. There are immense risks and efforts the protagonists take to build a society based on faith and family values.

Philippine migrant workers, employed as domestic help in Hong Kong, perform a dance on a street closed to traffic as they enjoy Christmas Eve festivities in the territory's Central district on Dec 24, 2017. (Photo:AFP)

The Covid-19 pandemic has further exposed domestic workers and their families to greater exploitation and abuse. But they have no choice. They need to work and earn a living for their loved ones. And their families left behind need to accept their fate.

In the first quarter of 2022, there were about 2.3 million Filipinos in the Middle East, according to a Department of Foreign Affairs report. The number comprises permanent and temporary residents including undocumented or irregular migrants.

Of the 10 million overseas Filipino workers spread across the globe, 95 percent are mothers, according to the Department of Foreign Affairs.

Almost 8 million children are left behind with immediate relatives like Marciana, the grandmother who draws strength from her devotion to the Catholic Church, which she serves with equal zeal.

When more than half of the Overseas Filipino Workers [OFWs] in the Middle East were repatriated to the Philippines, she prayed that her daughter may be spared.

Her prayers were not answered. But in a way that came as a blessing in disguise, especially when she learned about her daughter’s working conditions there.

“Edna never told me about her real situation in the Middle East. Every time, I tried to call her, she would tell me she’s okay and that I should only worry about her sons. Nothing more,” Marciana said.

Little did she know that her daughter was being abused by her employer and suffering silently.

“There wasn’t enough food, no paid leave. Had I known, I would have told her to come home. We could’ve managed by borrowing money … as long as she was safe and sound,” Marciana said.

Edna’s situation isn’t unique or unknown. In 2012, the Philippine government negotiated a $400 monthly minimum wage for Filipino domestic workers in Saudi Arabia to avoid underpayment for its workers.

Hopefully, the gloom in their lives is over now. Their faces are brightened up and there is renewed hope brought about by their faith in Almighty God.

Relatives of Philippine overseas worker Joanna Demafelis, whose body was found inside a freezer in Kuwait, attend a hearing on migrant workers at the Senate building in Manila on Feb 21, 2018. Philippine officials have sought greater protection for migrant workers, after a diplomatic row over the alleged mistreatment of Filipinos in the Gulf state. (Photo: AFP)

At three in the morning, Edna and her sons rode a rented jeep to Manila’s international airport to catch a flight at 8 am.

When she first left the Philippines in 2000, her only wish was to send something like $200 so her children could go to the nearest public school.

Edna always believed education was the greatest gift she could give her sons. She had previously served as a housemaid in Manila for 12 long years making $130 per month, which wasn’t enough to fulfill the basic needs of the family.

That’s when she decided to try her luck in the Middle East.

“I myself was not able to study. I only could finish Grade 6 [elementary education]. So, I ended up as a kasambahay [house maid]. I want my children to have a better future,” Edna said.

As Edna begins work with her new employer in a faraway land, only time will tell what’s in store for her.

She has nothing else to fall back on, except a rosary and a faded picture of her two sons in her wallet, and a devout mother who cares.