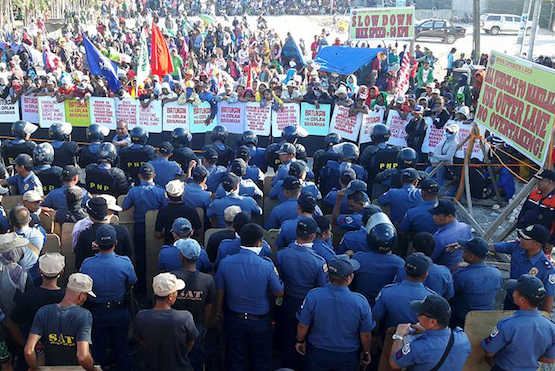 A standoff between protesting farmers and policemen enters a second day on a major highway in the southern Philippine region of Mindanao. (Photo courtesy of Notre Dame Broadcasting Corp.)

Some 6,000 farmers and tribal people have blocked a major highway in the southern Philippine province of Cotabato in a standoff to demand food and immediate relief from the effects of drought brought about by the El Nino phenomenon.

The "human barricade," which was set up on March 30, has already paralyzed the 220-kilometer highway that connects Cotabato and Davao provinces in Mindanao.

"We will hold the line until the government provides us food," said Pedro Arnado, chairman of the Peasant Movement of the Philippines in the Mindanao region.

The organization claimed the dry spell, which started in November 2015, has already damaged about 27,500 hectares of rice, corn, banana, rubber, coconut, oil palm, and vegetables.

As of February, the drought due to the El Nino phenomenon has affected 237,000 hectares of agriculture land.

In January, the government declared a "state of calamity" in the region, but Arnado said small farmers did not receive any assistance.

The government should "act on the demands of the farmers, Oblate Father Jonathan Domingo told ucanews.com March 31, adding that dire economic consequences could result if the barricade remains in place for a lengthy period of time.

A "neutral party" should intervene in this standoff, he said. "If this barricade continues, major economic activity in the region will be paralyzed."

"Many will suffer if this barricade will continue and more people will become victims of political and economic unrest," Father Domingo said.

Cotabato Gov. Emmylou Talino-Mendoza has so far refused to negotiate with the protesters, who are demanding 15,000 sacks of rice and subsidies.

In a statement, the International League of Peoples' Struggle, a global alliance of anti-imperialist organizations and mass movements, called on the Philippine government to immediately address the farmers' demands.

"The least that the government can do is to mobilize its resources to tide [the farmers] over," said league chairman, Elmer Labog.

He also called for international support for the farmers.

"The United Nations World Food Program has noted that the Philippines has a food deficit, which is exacerbated by the combined effects of natural and man-made disasters," said Labog.

According to the Department of Agriculture in February losses in the agriculture sector attributed to the dry spell was totaled at about US$58 million. Some 349,620 metric tons of crops had been destroyed and 121,490 farmers were affected,.