Filipino faithful told to abstain from clapping during Mass 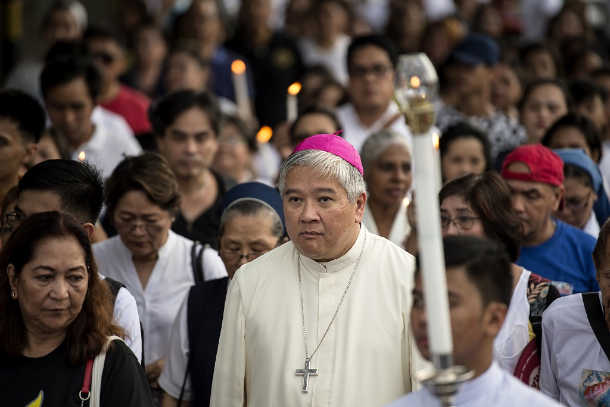 Archbishop Socrates Villegas has called on priests to refrain from encouraging people to clap during Mass. (Photo: AFP)

A Catholic bishop in the Philippines has urged the faithful to abstain from clapping during Mass, saying that the Eucharist is "a memorial of Calvary."

"Who would have clapped at Calvary? Would the Blessed Mother and John the Beloved have clapped?" asked Archbishop Socrates Villegas of Lingayen-Dagupan. In a Lenten message, the prelate said clapping at Mass "if not nipped early, can rob us of the true meaning of Christian liturgy and worship.""The breaking of the bread is a commemoration of the violent death that the Lord went through. Who claps while others are in pain? It is pain with love; yes, but it still pain.”He called on priests to refrain from encouraging people to clap to keep them awake during the homily."A well-prepared, brief, inspired and inspiring homily has a longer lifespan than intermittent clapping as you preach," said Archbishop Villegas."Is clapping in the midst of the homily or after it a sign of liturgical vitality? Is not this boredom coming from a misunderstood sense of worship and prayer?" he asked.By clapping, the community of prayer "becomes just an audience in need of entertainment; liturgical ministers become performers; and preachers become erudite toastmasters." He added: "It should not be so." If there is a need to give a post-communion message, he discouraged the naming of particular persons or groups who the parish wishes to appreciate for their work or donations made to the church. He said the giving of appreciation must be done outside the Mass.The archbishop said that when the congregation claps at an ordination Mass after calling the candidate, the applause is not for the ordained but for the Lord who calls. "This is not the case with much of our applause," he said.In his Lenten message, Archbishop Villegas said Lent, which will start on Ash Wednesday, has a somber and calm aura, the altar decors are restrained and the musical instruments are subdued."We fast from pleasure and restrain our appetite. Let us add more abstinence to this sober season. Let us abstain from applause in church. May this abstinence from clapping flow over into the other days of the year," he said.