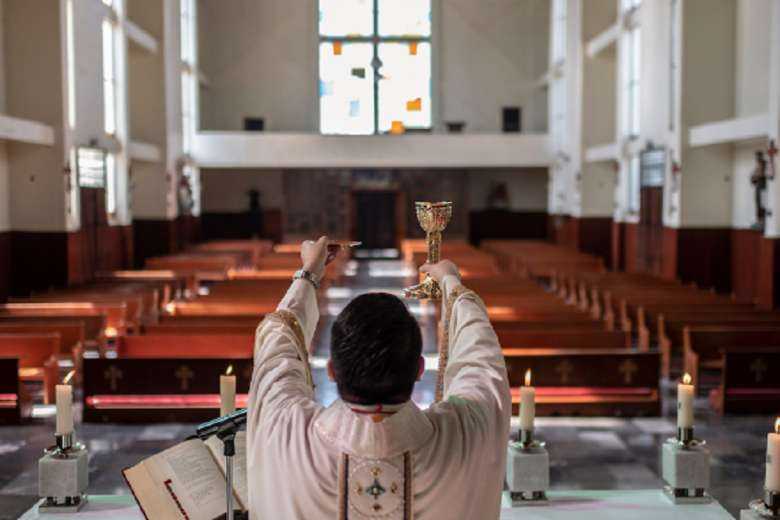 Churchgoers in the Philippines believe better music played over a good sound system in churches would boost attendances for Mass, according to a recent Radio Veritas survey. (Photo: AFP)

That was the result of an online survey of nearly 2,000 Catholics aged 21-39 carried out on May 4 by church-run Radio Veritas.

One of the questions the Truth Data Survey asked was: “What would you like to change at Mass?”

Most respondents said having a good song selection and audible sound system are indispensable but are lacking in many parishes.

“We conducted the survey to know the real needs and potential areas of improvement in celebrating Mass. Many do not go to Mass or abandon religion because they see the Catholic faith as boring,” Radio Veritas president Father Anton Pascual said in an interview aired on the station.

The survey was conducted among young professionals in response to a declining number of churchgoers in the Philippines.

They feel bored. This is the reason why many young Catholics are attracted to evangelical groups

“A good choir and song selection are important to many churchgoers, with 24 percent of those surveyed saying that good music is indispensable to worship,” Father Pascual said.

They believe that carefully chosen songs would help them connect better, he added.

“Before the pandemic, I went to church every Sunday. I never missed a Sunday even though I really did not enjoy Mass. Music is one way to improve the whole experience and a good sound system will help that,” Manila resident Gerald Giuia told UCA News.

Poor sound systems deter some people from participating in the celebration of Mass, he said.

“They feel bored. This is the reason why many young Catholics are attracted to evangelical groups. They are more alive and they seem more welcoming because of their pop songs,” Guia added.

“However, many of our choir leaders are untrained and some parishes lack the funds to buy a good sound system,” Father Manoling added.

According to a bishops’ conference report, at least 200 parishes in the Philippines rely on donations so that priests can have three meals a day.

“There are some parishes where priests live hand to mouth … If they cannot even afford food, how will they afford a good sound system?” asked Manila Social Action Center member Rommel Casimiro.