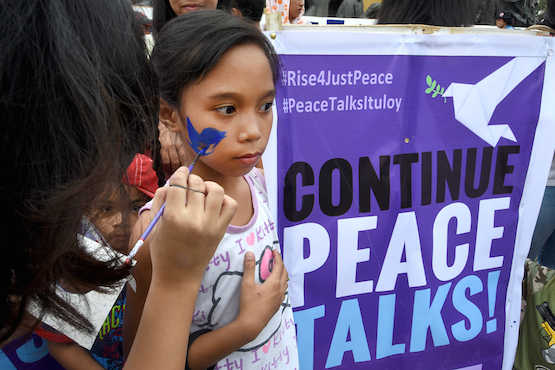 A child gets her face painted during a demonstration in Manila to call for the continuation of peace negotiations between the government and communist rebels. (Photo by Angie de Silva)

Church leaders in the Philippines warned of an upsurge in violence around the country after the government formally declared the termination of peace negotiations with communist rebels this week.

Catholic and Protestant bishops said the government's decision will only "incite more violence and virtually close the door to the peace talks."

The Philippine Ecumenical Peace Platform, an alliance of five Catholic and Protestant churches supporting the peace process, described the cancellation of the talks as "tragic."

"We find nothing more tragic than the refusal of warring parties to continue to open the doors for dialogue that can result in a further escalation of violence," the group said in a statement.

Philippine President Rodrigo Duterte formally terminated negotiations with the communists on Nov. 23, accusing the rebels of engaging in "acts of violence and hostilities" during the talks.

Duterte issued a proclamation declaring "the termination of peace negotiations with the National Democratic Front-Communist Party of the Philippines-The New People’s Army."

The NDF is the umbrella organization of the communist-led underground movement that has been waging war against the government for almost five decades.

The NPA, the armed wing of the Communist Party of the Philippines, earned the ire of the president for staging attacks that killed civilians.

Last week, Duterte announced that he would issue a proclamation that will classify the communist rebels as terrorists and criminals.

"I will remove them from the category of a legal entity or at least a semi-movement, which would merit our attention, placing them as terrorists," he said.

On Nov. 22, Duterte said he would also order the arrest for terrorism, members of the communist movement's "legal fronts."

The church leaders warned that "the war is intensifying, and it can only get worse." The group said "positive results from the talks" should be pursued and not abandoned.

"The roots of the armed conflict should be addressed and this could be achieved through the negotiations," it added.

Government and rebel peace negotiators earlier signed agreements that were supposed to address incidents of violence during past talks.

The Comprehensive Agreement on Respect for Human Rights and International Humanitarian Law and a supplementary agreement to revive and strengthen a joint monitoring body were supposed to address violations by both parties.

There was also progress in recent months in the negotiations for the Comprehensive Agreement on Social and Economic Reforms and a possible bilateral ceasefire agreement.

"It is in this spirit that we appeal to the government to reconsider its plan to categorize the NPA as a terrorist organization," said the church leaders.

For its part, the NDF said it "views with grave concern" Duterte's sudden unilateral cancellation of negotiations "at a time when unprecedented advances have already been achieved."

The drafts include significant reforms pursued by Duterte's administration, including the free distribution of land to tillers.

Formal negotiations between the government and the communist-led NDF opened in Norway in August 2016 after years of suspension.

The country's communist insurgency started in the 1960s and is considered to be one of the longest in the world and is estimated to have already claimed as many as 40,000 lives.