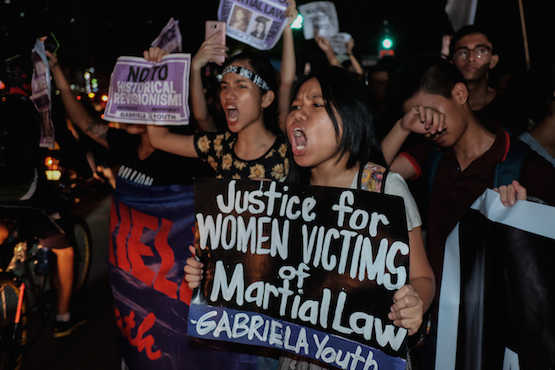 Church leaders and activists in the Philippines have warned of widespread protests across the country after the government allowed the burial of former dictator Ferdinand Marcos in a cemetery for heroes last week.

"The people will not be silent about this," said Auxiliary Bishop Broderick Pabillo of Manila, chairman of the Commission on Laity of the Philippine bishops' conference.

The bishop said Filipinos are "creative" when it comes to showing their opposition to issues. "There will be protest actions," said Bishop Pabillo.

The Philippine Council of Evangelical Churches, meanwhile, said the burial of Marcos led people, especially the young, to ask what really happened during the "dark moments" of Philippine history.

"As a nation, we should answer all these queries in proper time so we can really move on. The blood spilled and lives lost during martial law are crying for justice and are needing reparations," said Bishop Noel Pantoja of the Evangelical Council.

He said the Filipino people "can only truly move on as a nation and release forgiveness, if truth is established and transgressions are acknowledged."

Activist groups have announced that they will hold a "massive protest action" on Nov. 25 to show the people’s indignation over the burial of Marcos in the cemetery for heroes.

They said the burial of the late dictator was a "direct affront to the victims of martial law and the activists who fought against dictatorship."

Anti-Marcos groups urged the public to make the protest "encompassing."

"We’re hoping the crowd will be really big. We want this to be neutral, encompassing all sectors," said activist Bonifacio Ilagan, a martial law victim.

The National Union of People’s Lawyers, meanwhile, filed a motion in the Supreme Court on Nov. 21 accusing the Marcos family and government officials of being in contempt of court, saying the burial was "premature, precipitate, and irregular."

Lawyer Edre Olalia said court rules allow petitioners against the Marcos burial 15 days to appeal the decision released on Nov. 8, but the Marcos family proceeded with the military interment rites.

The lawyer said his group will ask the court to order the exhumation "and probably even exorcism" of the late dictator’s remains. Students from Catholic schools in Manila walk out of their classes to protest the burial of former dictator Ferdinand Marcos in the country's cemetery for heroes. (Photo by Angie de Silva)

However, a leading Catholic priest said exhuming the late dictator's body is "insensitive" to Christian sentiments if done for political reasons.

Father Jerome Secillano of the public affairs office of the bishops' conference said there are instances when exhumation may be allowed.

"For purposes of verifying if a dead body is incorruptible or if the remains needed to be transferred to a more suitable place, exhumation may be allowed," he said.

The priest said those opposed to the burial of Marcos in the cemetery for heroes have the right to seek other legal options.

"If the court favors [the motion], the Marcos family will have to follow suit," said Father Secillano.

"What is important is the family's consent to the exhumation. The family followed the court to bury the former president. If the court decides to exhume it, they will have to follow it also," said the priest.

In a statement that went viral on social media, Archbishop Ramon Arguelles of Lipa called for prayers and respect for the late dictator.

"If we are godly, even though he was a dictator, since he is already dead, we should pray for his soul. We should respect his remains," the prelate told church-run Radio Veritas.

"He was a sinner. We are not saying that what he did was good, but we should not hate as he is now dead," added Archbishop Arguelles.

Bishop Pantoja of the Evangelical Church agreed, saying that the Filipino people should respect the Supreme Court’s decision.

"That's how our system works," said the prelate, even as he said that historical facts show that "thousands were killed, tortured and deprived of human rights under Marcos."

The Nov. 18 burial came ten days after the Philippine Supreme Court ruled to dismiss the consolidated petitions seeking to stop President Duterte's order to bury Marcos in the heroes' cemetery.

In its decision, the court said there was no law prohibiting the burial, despite allegations of rights violations and corruption against him.

Marcos, who ruled the Philippines as a dictator for 14 years, died in Hawaii three years after a popular revolt ousted him from power in 1986.

Since his death, the Marcos family has pushed for a hero's burial for the dictator, citing his accomplishments as a former soldier and president.