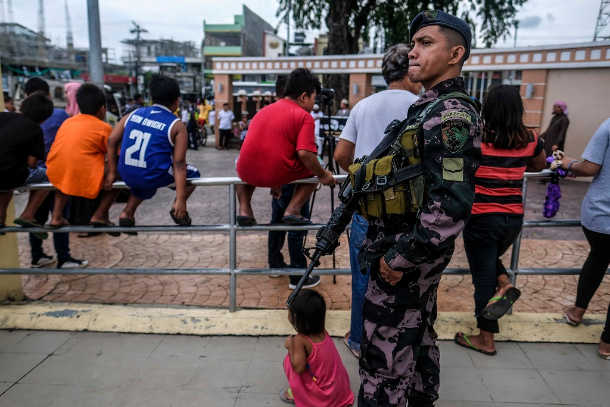 A soldier stands guard outside the Minor Basilica of Our Lady of the Most Holy Rosary, a popular pilgrimage site, in the northern Philippine town of Manaoag on Aug. 11. (Photo by Jojo Rinoza)

Catholics flocked to churches for Masses in the northern Philippines at the weekend, defying reported threats of terrorist attacks on places of worship to coincide with a major Islamic holiday.

In the town of Manaoag, in Pangasinan province, Catholics seemed unfazed by reported threats on "crusader cities and churches" by the so-called Islamic State group.

Philippine authorities had earlier placed the town’s Minor Basilica of Our Lady of the Most Holy Rosary, a popular pilgrimage site, under tight security.

A military memo, leaked to the media last week, cited a "possible terror attack" in several areas in northern Luzon. The memo noted that a "crusader city" with business centers and "crusader churches" in Northern Luzon were being targeted. It added that "crusader cities" is a term used by the terror group when describing targets to fuel "war between Muslims and Christians." "Crusader churches" is the generic term used by Islamic State for "historic Catholic churches." On Aug. 11, heavily-armed soldiers and policemen, as well as sniffer dogs, were deployed around the church in Manaoag. Dominican priest Anthony Eudela, prior of the Basilica, said he was "overwhelmed" by the attendance for the Sunday services despite the threat. "I am happy that people proved that their faith is stronger than their fear," said the priest.

Father Eudela said the threats will not affect church activities.

"We will not cancel Masses nor will we shorten them. We just pray, pray, and pray, there’s nothing else left [to do]," he said. A group of Muslims, meanwhile, showed their support for their Christian neighbors by going to the basilica with placards condemning terrorism. Guialoson Kadir Macmod, a Muslim community leader, said they set aside their celebration of "Eid'l Adha" because "it was more important for us to show our support." "Eid's Adha," celebrated in the Philippines on Aug. 12, is the second of two Islamic holidays celebrated worldwide each year and considered the holier of the two. It honors the willingness of Ibrahim (Abraham) to sacrifice his son as an act of obedience to God's command. "We are saddened when terrorism is identified with Islam, terrorism is un-Islamic," said Macmod.  A Catholic bishop thanked the Muslims and expressed hope the observance of Eid'l Adha would "make us all aware that our life is meant to be of service to others and this entails sacrifice." "In this life, we are challenged to make sacrifices for the welfare of others," Archbishop Martin Jumoad of Ozamiz said. The terror alert came nearly seven months after the bombing of a Catholic cathedral in the southern province of Sulu on Jan. 27. The twin blasts, carried out by Islamic State-inspired fighters, left 22 people dead and more than a hundred others injured.