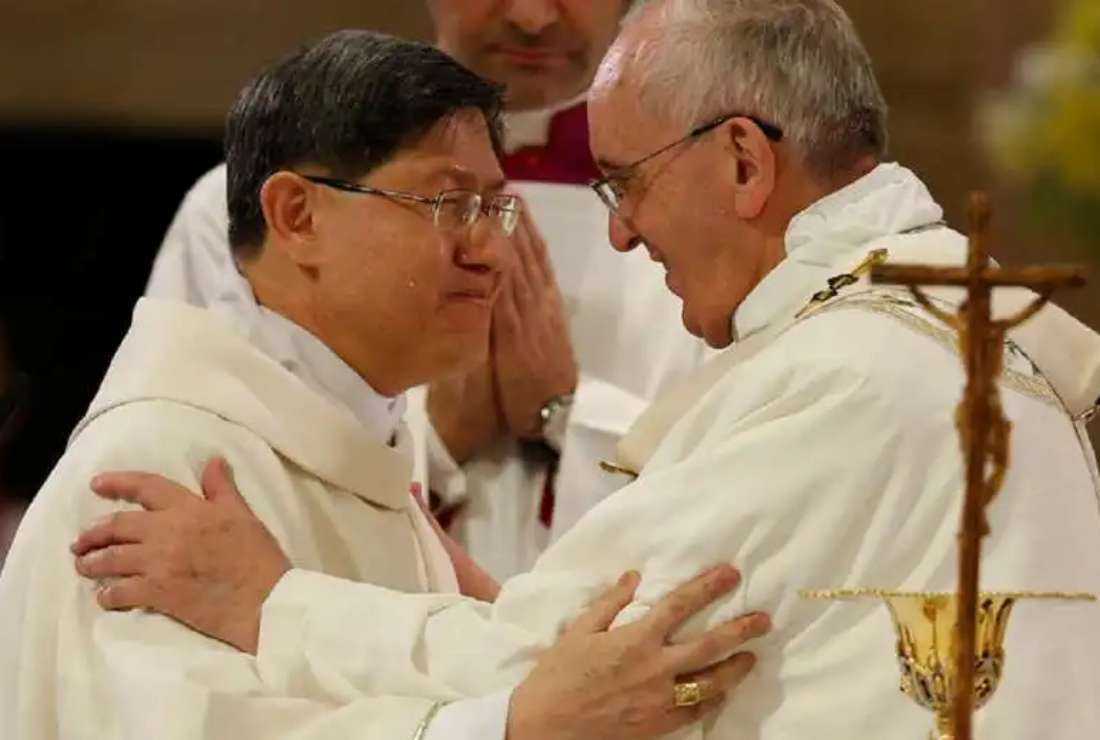 Pope Francis and Cardinal Luis Tagle greet each other at a Mass in Manila in this 2015 file photo. (Photo: Catholic Bishops' Conference of the Philippines)

Catholic groups in the Philippines have criticized media speculations that Filipino Cardinal Luis Antonio Tagle could be the next pope.

Talks about a likely outcome of a conclave were mere speculations and Catholics should not get engaged in it, said Our Lady of Pillar Catholic Women’s League in Manila.

The group was responding to a speculative article published by a London-based Catholic Herald, which claimed Cardinal Tagle and Hungary’s conservative Cardinal Péter Erdő are front runners to succeed Pope Francis.

“To every Filipino Catholic out there, please refrain from sharing messages calling for the cardinals around the world to vote for Cardinal Chito Tagle in the next conclave. Instead, let us pray for the health of Pope Francis,” the group said in a statement on Aug. 9.

Filipino Catholics should not engage in “electioneering” because the election is not a “political thing,” said the Catholic women’s league.

“Remember in the last conclave, no one was talking about Cardinal Jorge Bergoglio yet he became our present pope. The conclave is not a political thing for us to meddle with… it’s not for us to decide who the next pope is. It is the work of the Holy Spirit through the Sacred College of Cardinals,” the group added.

The article in the Catholic Herald said one leading candidate to succeed Pope Francis is Hungary’s Cardinal Erdő, "a conservative canon law expert from a country on the frontline of the European culture war."

"His appointment would send a powerful message about the direction the Church would be taking," it claimed.

"On the other hand, a Pope from the developing world – such as the Philippines’ Cardinal Luis Antonio Tagle – would be hailed by liberals, given the changing demographics of the Church,” the article said.

It triggered a spontaneous reaction from Filipino Catholics around the world calling to support the first Filipino likely to be pope.

“Let us all pray that the Cardinals will elect Cardinal Luis Antonio Tagle. He will surely lead the [Catholic] Church towards the peripheries and to the marginalized, things our present pope [Francis] has been doing,” read one of the campaign messages online.

The Servants of the Holy Spirit in the Baguio diocese, north of Manila, though said Catholics should not interpret the conclave as a contest between the liberals and the conservatives within the Church but as a search for the will of the Spirit.

“It is pity and a theological blunder to see the conclave like an election of a president. It is not. Though papacy has human participation, that is, in the casting of ballots or voting, our faith teaches us it is defined by great prayer and discernment. Let us spare the conclave from politics,” the Catholic group said in a statement.

Pope Francis recently appointed him as one of the 22 members of the Vatican’s Congregation for Divine Worship and the Discipline of Sacraments besides holding key positions in the Curia such as president of Caritas Internationalis.