Filipino Catholics cling on to faith amid hardships 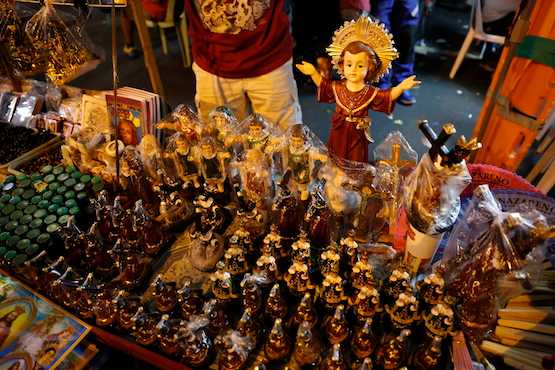 Images of the Child Jesus are sold on the streets of Cebu days before the feast on Jan. 15. (Photo by Joe Torres)

Filipinos open themselves to the "divine" every time they celebrate a religious festival, whether it is to honor an image of a newly-born Jesus or a suffering one.

"[Religious images] are our toolkit," says sociologist Manuel Victor Sapitula of the University of the Philippines. "Filipinos let the divine intervene or take control, or to simply help them carry the burdens of life."

He says the religious icons — the Black Nazarene and the Santo Nino or the Child Jesus — are "the gauze that we use whenever we are bleeding."

"They are the ear that will listen, a hand that will guide, a hug that will comfort," says Sapitula. "The images are our coping mechanism, and it seems to have become the purpose of our religion."

Maria Mesa de Parine, a 50-year old mother who lost two sons to the government’s war on illegal drugs, says she continues to cling to God amid the challenges she faces.

"I always pray to the Santo Nino to take care of my children, even in the after life," says Maria who works in a nearby sardine canning factory.

Her youngest son Aljhon, 23, worked as a fist hauler until he was killed by masked vigilantes hunting drug users.

"I heard him call my name, begging for my help," recalls Maria. "But I was helpless." She claims that Aljhon's only vice was smoking cigarettes.

"He was not on any drug list," she says, adding that it might have been a case of mistaken identity.

At Aljhon’s wake, armed men snatched Maria's eldest son, Danilo, 30. He was taken to the village hall, a few blocks away from Maria's shanty, and detained.

The village police told Maria to pay about US$200. "They said that if I could not give them the money by one o'clock in the morning, my son would be taken away."

Maria was not able to ransom Danilo, whose bullet riddled body was later found floating in a river.

Danilo was buried in a mass grave three months later.

Maria knelt before the image of the Child Jesus. "I came to the point of asking Him why he let it happen to my family," she says.

Then the mother realized that she had nobody to cling to. "The Lord Jesus is the only one left to help me carry this burden," says Maria.

Sociologist Jayeel Serrano Cornelio of the Jesuit-run Ateneo de Manila, says Filipino devotion to the Child Jesus, whose feast is celebrated around the country on Jan. 15, revolves around suffering and struggle.

"Suffering does not make Filipinos doubt, but rather it makes them more devoted," says Cornelio. "Tragedy and suffering are not reasons for them to doubt their faith."

The image of the Child Jesus is very popular in the Philippines "because people see it as very much part of their everyday lives."

The image can be seen all over the country — homes, restaurants, offices, bars, and even in vehicles. Devotees even dress their images up as vendors, farmers, fishermen, doctors, teachers, or policemen.

Devotion to the Child Jesus started in 1565 when Spanish soldiers found an image under a pile of ashes in the central Philippine province of Cebu.

It was later discovered that the image was a gift of Portuguese explorer Ferdinand Magellan, head of the first Spanish expedition in 1521, to the queen of the island when she was baptized a Christian.

Father Manuel Vicente Catral of Tuegegarao Archdiocese says Catholics look at the Child Jesus as a "God who is the hope of the poor."

"In Him, we see God as a Child, the stress reliever, a child who takes away our tiredness," says Father Catral. "He is comfort of the oppressed, the burdened, the ordinary people."

The priest says the image of the Child Jesus shows a God who is accessible. "He is God, but a child who we can unburden all of our fears."

"For many of us, life needs a simple, plain faith. Like a child, which the Santo Nino portrays, our faith must be free, humble, and dependent on God."