Bishops urge their parishioners to vote for honest and competent leaders 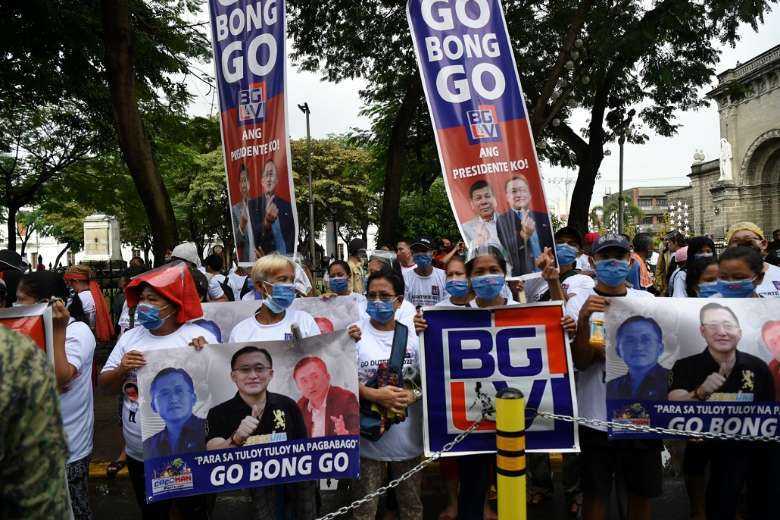 Supporters of presidential candidate Christopher 'Bong' Go (pictured on placards) hold a rally in front of the commission on elections in Manila on Nov. 15. Go today announced his withdrawal from the race. (Photo: AFP)

Dioceses in the Philippines on Nov. 28 began a “prayer power campaign” for clean and orderly elections in 2022.

The Catholic Bishops' Conference of the Philippines (CBCP) urged churchgoers to recite the prayer and offer intentions for “peaceful, credible and transparent” national and local elections.

On May 9, Filipinos choose their next leaders, with the main focus on who will succeed controversial President Rodrigo Duterte.

The prelates said they were requested by a lay group, the Parish Pastoral Council for Responsible Voting, to endorse a campaign asking the public to collectively pray for the election.

“They requested the body [bishops’ conference] to enjoin all parishes, shrines and chapels in the country to pray the Prayer for 2022 Elections prepared by Archbishop Socrates B. Villegas in all our Sunday Masses,” said CBCP president Archbishop Romulo Valles in his letter.

After all, being Christian does not end after the Mass — it must translate to casting votes. Our votes reflect our values as a people

Archbishop Valles said the prayer was based on the 16 values enshrined in the Philippine constitution such as the respect for creation and human dignity.

“Shepherd of souls and Savior of the nations, politics is your gift to us, a call to serve others and grow in holiness. Guide our politics as you guide our lives,” said the prayer.

“I personally find it meaningful to pray for the country after receiving communion. After all, being Christian does not end after the Mass — it must translate to casting votes. Our votes reflect our values as a people,” Manila lay minister Christopher Lazaro told UCA News.

Lazaro said clergymen should be “more aggressive” in leading Catholics in choosing the right leaders for the country.

“Our bishops and priests may not be allowed to engage in partisan politics but at least they could give guidelines to form the conscience of the electorate. Conscience formation is very important,” Lazaro added.

Parishes would also display the prayer in their premises so that churchgoers could be reminded every time they visit the church.

Another churchgoer said the prayer’s focus on the poor should be highlighted because the elections were for them.

“I found the line in the prayer — that human dignity may be respected all the time ... that the poor and the weak may always have priority — very profound. It gives me the idea that the Church is very much present in people’s lives, even in politics,” Quezon City parishioner Douglas Ventura told UCA News.