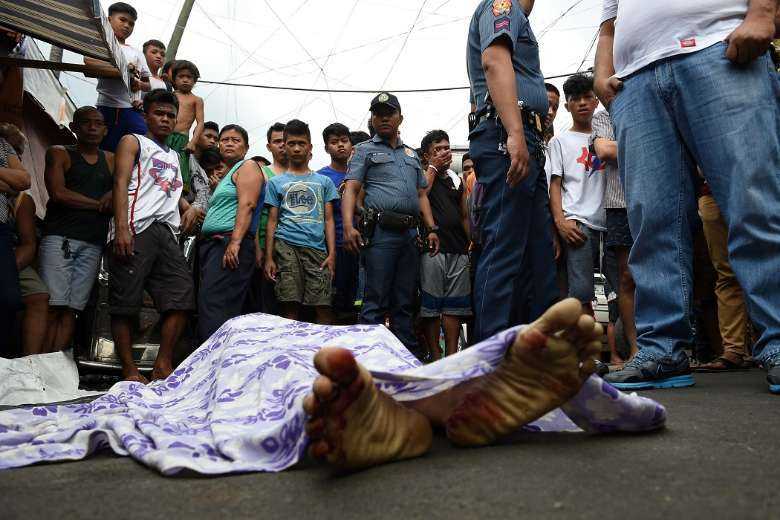 Residents and policemen gather over the body of a suspect killed during an anti-drug operation at an informal settlers' area near a port in Manila on Nov. 10, 2016. (Photo: AFP)

Catholic groups and clergymen in the Philippines have welcomed a call by the chief prosecutor of the International Criminal Court (ICC) for a full investigation of President Rodrigo Duterte’s war on illegal drugs that has reportedly claimed over 30,000 lives.

On June 14, chief prosecutor Fatou Bensouda, who began a preliminary investigation into the drug war in 2018, said there was a “reasonable basis” to believe that Duterte had committed crimes against humanity through the “widespread” and “systematic” mass killing of alleged drug suspects while mayor of Davao City in the Mindanao region.

The Philippines left the ICC in 2019 when the court began looking into the drug war but Bensouda said the court still had jurisdiction over crimes committed while the country was a member.

“There is a pattern in the killings observed in Davao province in Mindanao during President Duterte’s term as local chief … This extends to his term when he became president in 2016,” she said.

The social justice commission of Santa Cruz Parish in Manila Archdiocese said Bensouda’s comments should put Duterte on the road to appearing in the court in The Hague, where he would be brought to justice to face his crimes.

Justice is not blind. Evil will never triumph. Justice shall flourish, hopefully in our time

“This announcement is a moment of hope for thousands of families in the Philippines who are grieving those they lost to the government’s war on drugs. This is a much-awaited step in putting murderous incitement by President Duterte and his administration to an end,” said commission member Roderick Lingkop.

He said the group was happy that the prosecutor also pointed the finger at two other high government officials.

“[They] were probably responsible for ordering, directing and organizing the overall conduct of the war on drugs operations in which a huge part of the alleged crimes were committed,” Bensouda said.

Divine Word Father Flavie Villanueva said it was high time justice ruled in the Philippines and for Duterte to be held accountable.

“Justice is not blind. Evil will never triumph. Justice shall flourish, hopefully in our time,” Father Villanueva posted on social media.

Father Villanueva warned Duterte and his administration that the time of reckoning was near.

“Indeed, the moral arc of the universe is long but it bends towards justice. The ICC prosecutor has taken a brave step in a long journey towards justice,” Father Buenafe said in social media.

Duterte’s spokesperson Harry Roque said the prosecutor’s call was politically motivated and an “insult” to the Philippine judicial system. He said the Philippines would not cooperate with any such probe.