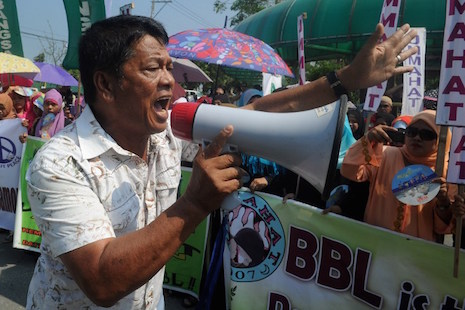 Philippine Muslims supporting the peace accord between the government and the Moro Islamic Liberation Front shout slogans during a June rally to press for the passage of a law to implement the agreement. A Filipino cardinal has also urged the government to pass the long-delayed legislation. (Photo by Jay Directo/AFP)

Cardinal Orlando Quevedo, archbishop of the predominantly Muslim city of Cotabato in the southern Philippines, has called on peace advocates to continue calling for the passage of a law that will create an autonomous Muslim region in Mindanao.

"Let us appeal to [the legislators'] sense of the common good," the cardinal told a gathering of peace advocates and civil society groups in Cotabato City this week. "Let them be aware that social justice long denied the Bangsamoro is in their hands."

Opposition from some sectors and the lack of a quorum in the House of Representatives have delayed the passage of the proposed Bangsamoro Basic Law that is supposed to give autonomy to Filipino Muslims in Mindanao.

The proposed law is the result of a peace agreement signed by the Philippine government and the rebel Moro Islamic Liberation Front in 2014 to end almost four decades of war in the southern region of the country.

"Now is the time not to squander the opportunity of laying down the foundations of a just and lasting peace," Cardinal Quevedo said in his Oct. 7 speech at a forum entitled People's Conversations on Hurdling the Roadblocks in the Bangsamoro Roadmap to Peace.

The prelate said that the versions of the proposed law in Congress "are far from acceptable" and are "reflections of a dismal mindset that is hopelessly mired within the structural paradigm of local government units."

He said the "underlying attitude of mistrust, bias and prejudice, fear and even paranoia with regard to Muslims" is a major roadblock that peace advocates need to confront.

Cardinal Quevedo said those who seek peace in Mindanao have no option but to continue to engage legislators to come up with an acceptable version of the law. Guiamel Alim, chairman of the Consortium of Bangsamoro Civil Society, said some groups are still doing their best to have an acceptable law passed.

"While others may already be feeling hopeless, we continue to lobby ... We do not want history to condemn us for not doing the utmost effort to attain peace," he said.

Christian Monsod, a lawyer and constitutional expert, said the proposed Bangsamoro autonomous region can be a "model for social justice and human development that we have so far failed to do for the whole of the country."

"Are we incapable of that trust or are we afraid to give it the autonomy, powers and resources to do a good job of it because they might succeed where we, the Christian majority, have failed?" asked Monsod.