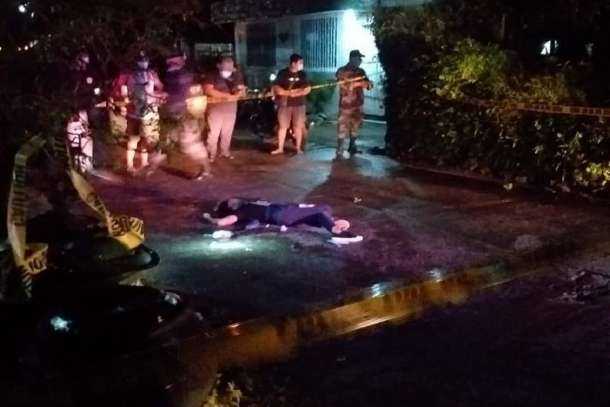 Police cordon off the scene where church activist Zara Alvarez was shot dead in Bacolod City on Aug. 17. Bishop Joel Baylon of Legaspi has condemned the killings of two other lay leaders shot dead in Albay province in the Philippines on Sept. 21. (Photo supplied)

A bishop has condemned the red-tagging and killing last week of two village heads who also served as parish workers on the main Philippine island of Luzon.

Village chief Luzviminda “Kap Ida” Dayanda and treasurer Albert Orlina were reportedly shot dead by gunmen in Guinobatan in Albay province on Sept. 21 while heading home after a meeting at the town hall.

They were also active lay leaders in St. Vincent Ferrer Parish in Mauraro, a nearby village.

Prior to their deaths, they were falsely red-tagged, a local term for being accused of supporting communist rebels, according to Legaspi Diocese.

“We are in disbelief that Dayanda and Orlina were murdered in cold blood. We received reports that they were accused of being members of the Communist Party when in fact they were very active in church activities.,” the diocese said in a statement denying the pair were rebels.

Bishop Joel Baylon of Legaspi called the killings “inhuman” and called for the speedy disposition of justice.

“These attacks were inhuman and contrary to the teachings of Jesus. We are a government of laws, not of men. Laws are in place to ensure due process is given to any accused. I pray that government authorities may have the mind and spirit to investigate and to bring the perpetrators to justice,” Bishop Baylon said.

“[Kap Ida] Dayanda and Albert [Orlina] were active lay leaders in their parish. Kap Ida served as chair of their village pastoral council while Albert was a member of the same council. They did not deserve their fate,” he added.

Bishop Baylon also said the slayings of Dayanda and Orlina added to a growing list of murdered lay leaders.

On Aug. 17, church activist Zara Alvarez was shot dead in Bacolod City. Alvarez was a human rights activist and volunteer for the Church-Workers Solidarity group in San Carlos Diocese in the Visayas region.

On Aug. 10, men abducted 72-year-old labor leader Randy Echanis from his apartment and bundled him into a vehicle before killing him.

Bishop Baylon said Filipinos must not forget all those who have been killed in such circumstances.

Of Dayanda and Orlina, the prelate said he could attest to the victims’ faith in God and humble service to the local church of Legaspi.

“They were passionate to their calling. We pray for consolation, peace and the safety of their community and the family and loved ones they left behind,” Bishop Baylon said.