Christians in ethnic minority areas like Kachin, Kayah, Karen and Chin are at the receiving end of the conflict Burnt buildings in Kone Tha village of Demoso township in Kayah state are seen in this handout from the Karenni Nationalities Defense Force (KNDF) taken in September. (Photo: AFP/KNDF)

Christian-dominated areas in Myanmar continue to witness intense fighting between the military and disparate resistance groups even after the ruling junta announced a unilateral five-month ceasefire on Sept. 27.

The fighting has escalated in Demoso township in eastern Myanmar’s Kayah state where thousands have already been displaced. Some civilians were killed and houses burned down, according to local media reports.

Gunfire continued in Chin state in western Myanmar too. In the nearby Magway region, the military reportedly raided Gangaw township and set fire to at least eight houses.

Christians in ethnic minority areas such as Kachin, Kayah, Karen and Chin states have historically faced oppression and persecution for more than five decades of iron-fisted military rule in the country.

The ruling junta, which is facing intensifying and increasingly widespread resistance to its rule, announced that the military, or Tatmadaw, would down its weapons as a “gesture of good will” from Oct. 1 until the end of February 2022.

The ceasefire announcement, however, did not call a truce with the loose coalition of ethnic armed organizations and civilian militias that have sprung up to oppose the military in various regions across the country.

Observers believe the move aimed to ease international pressure on the junta.

“There is little reason to think that the Tatmadaw has had a change of heart regarding Myanmar’s ethnic minorities,” said Jay Church, advocacy manager for Southeast Asia at International Christian Concern.

He felt the announcement did mean “a weakening of the Tatmadaw’s desire to eradicate the country’s ethnic and religious minority communities.”

The military has stepped up troop deployment in Sagaing and Magwe regions, besides Chin and Kayah (Karenni) states, following a call for a people’s defensive war by the National Unity Government (NUG) in exile established by ousted lawmakers, activists and ethnic groups. 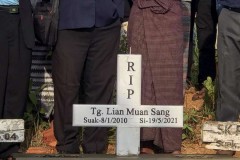 Myanmar has descended into chaos following the coup on Feb.1, with increasing deaths and displacements, burning of houses and intensifying fighting in minority ethnic areas.

A UN official in Myanmar has said the people in the Southeast Asian nation are living in “a severe crisis” with a level of poverty not seen for at least 20 years.

Andrew Kirkwood, United Nations resident and humanitarian coordinator, told reporters in a virtual briefing recently that the number of people needing aid has tripled to three million since the coup while a total of 20 million, or nearly half the population, are living in poverty.

UN secretary-general Antonio Guterres has called for an urgent international response to the political crisis in Myanmar.