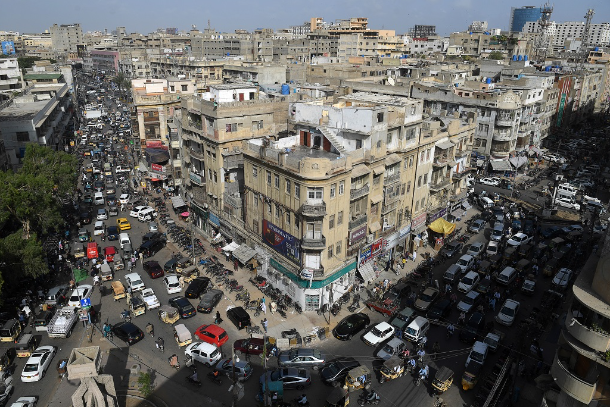 Vehicles are seen in a traffic jam in Karachi on June 1 after Pakistan's government eased a nationwide lockdown imposed as a preventive measure against Covid-19. (Photo: Asif Hassan/AFP)

When Hammad Hasan harvested his vegetable crop this March, the wholesale market was closed during the nationwide lockdown due to the coronavirus outbreak.

“I was at a loss. Hundreds of kilos of vegetables were ripe on my farm but neither vehicles nor dealers were available. All my sweat and hard work seemed wasted,” Hasan told UCA News.

After waiting for a few days, he rented a cart to sell the vegetables in 39/DB village and surrounding areas of Khushab district in Punjab province. Together with his uncle, the 21-year-old sold out his cauliflowers last month.

“This is the first time we have worked as street vendors and it actually turned a profit. I used to sell five kilograms of cauliflower for 100 rupees (61 US cents) in the market. The rate in the streets was 40 rupees for only one kilo. Plus we saved the truck rent as well as time,” he said.

“Buffalo milk had lower demand but we sold it at a lower price. Our family consumes the leftover milk. Times are tough but at least we are not trapped in the house like city dwellers.”

Hasan observed a simple Eid last week and avoided visiting his friends and relatives as the nation mourned the Pakistan International Airlines crash that killed 97 people on May 22.

Prime Minister Imran Khan in a live televised address on June 1 announced that the government is gradually easing the lockdown as the caseload of Covid-19 infections passed 72,000 with 1,543 deaths.

"We are not in a state to extend the lockdown as it has had an adverse effect on our economy. Our exports have plunged and we fear that our remittances might fall as well,” Khan said.

“The number of cases and fatalities will increase now … it is up to you people to take preventive measures and ensure standard operating procedures to reduce the burden on the healthcare system.” In its May 15 summary to Chief Minister Sardar Usman Buzdar, Punjab Primary and Secondary Healthcare Department reported that "no workplace and residential area of any town is disease-free" in Lahore alone, and that total virus cases in the Punjab capital are estimated at around 700,000.

Meanwhile, human rights activists are demanding a strict lockdown and declaration of a health emergency in Punjab.

“We are in shock. The state has completely resigned from its responsibility. We thought the state would provide basic health facilities. Another promise broken. Sadly it’s another U-turn when we needed the help of the state,” said Professor Taimur Rehman, general secretary of Mazdoor Kissan (Workers and Farmers) Party.

In a press release issued last month, the Food and Agriculture Organisation announced a redesign of the curricula of Farmer Field Schools to educate rural communities on precautionary measures to combat the coronavirus for safe agricultural practices.

“The impacts of the virus outbreak resulted in the disruption of food supply chains, gaps in farming inputs and unemployment. Safety of vulnerable populations, careful planning and social safeguarding measures while delivering the support remain the utmost priority,” it stated.

In its third quarterly report on the state of the economy in 2019, the State Bank of Pakistan noted that 36.9 percent of the country’s households are “food insecure.”

Jennifer Ankrom, director of Action Against Hunger’s Country in Pakistan, also warned that Covid-19 could lead to the collapse of Pakistan's food system.

“An exception has been made for the majority of farmers in rural areas, so they can continue their activities because the country is in the midst of a harvest. But this will not be enough to avoid the agricultural crisis that is looming in rural areas because with the confinement, the transport of goods is greatly reduced, markets are less accessible and small producers have difficulty selling their products, leading to wasted stocks and falling prices,” he said.

“If Pakistan’s agricultural system collapses, the consequences will be strong at the regional level as well, since the country exports a lot of goods to neighboring countries, particularly Afghanistan. With the spread of Covid-19, we are therefore at risk of a regional food crisis affecting millions of people. It is necessary to combine the fight against the virus with the fight against hunger.”

Under its Smallholder Adaptive Farming and Biodiversity Network (SAFBIN) program, Caritas Pakistan is guiding farmers like Hasan in adapting to the pandemic.

“They are adopting hygiene measures, limiting social gatherings and spending most of the time at farms observing social distancing. The promotion of family farming is not only helping family members stuck at home during the lockdown but also reducing cost and usage of pesticides and weedicides.”

Since 2018, Caritas Pakistan has been implementing the SAFBIN program in 20 villages of Sargodha and Khushab districts, focusing on making small farm households resilient and enhancing their capacity to adapt to climate change and disaster while maintaining the ecosystem and soil health.