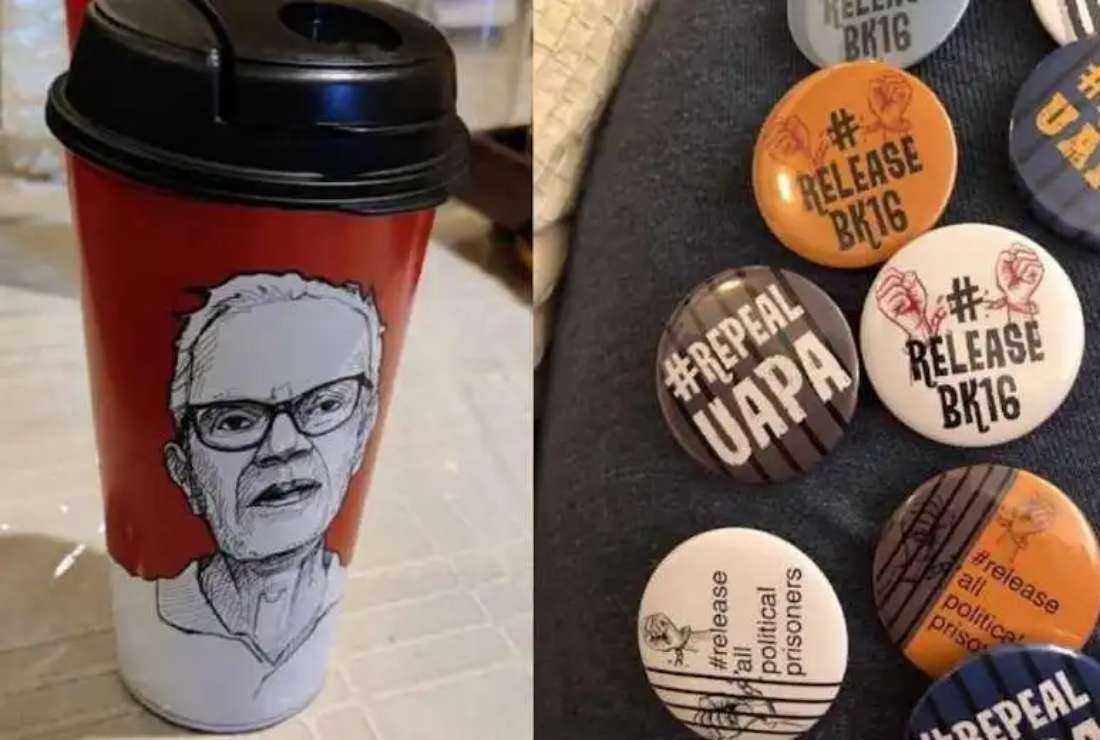 An image of Father Stan Swamy on a cup and badges that rights groups issued as part of their campaign demanding the release of the Jesuit priest before he died in custody and 15 other activists accused of terror links. (Photo: UCA News)

Friends and colleagues of a dead Jesuit Indian priest have pledged to continue the fight “to clear his name from the false cases” that led to his arrest, imprisonment and death in custody.

Father Stan Swamy, the 84-year-old priest and indigenous rights activist died on July 5, 2021, after being denied timely medical treatment for Parkinson’s disease and other age-related ailments.

“Father Swamy worked for justice and paid the price for it. We want to carry forward his legacy,” said Father Joe Xavier, convener of the Father Stan Swamy Legacy Committee of the Jesuits.

They said the elderly Catholic priest was trapped by planted false evidence and questioned the dubious role of the anti-terrorism agency, the National Investigation Agency (NIA), which implicated Father Swamy and 15 others in Bhima-Koregaon violence in the western state of Maharashtra on Jan. 1, 2018.

The NIA also accused Father Swamy and others, including academics and activists, of conspiring with outlawed Maoist rebels to destabilize the Indian government.

“The NIA did not even keep Father Swamy in its custody for a day knowing well that he was weak and frail and directly sent him to judicial custody, as it did not want him to die in its custody,” Desai alleged.

Generally, investigation agencies seek custody of the accused for questioning and evidence gathering.

“The probe team did not recover any arms, money, letters or documents from them but charged them with such serious offenses based on so-called digital evidence,” the lawyer said.

A recent report by Massachusetts-based Arsenal Consulting, a digital forensics firm, disclosed how Father Swamy was arrested based on evidence planted into his computer’s hard drive by hacking it.

"Father Swamy’s computer was hacked as early as 2016"

“Arsenal has found no digital evidence to indicate that there was any interaction between the owner of the computer and the documents that were planted on the hard disk,” Nagarjuna said.

Quoting Arsenal’s findings, he said Father Swamy’s computer was hacked as early as 2016 using malware called Netware, which created and planted the documents on his hard disk.

“This digital evidence of the malware and its activities were remotely deleted from the hard drive a day before it was seized by the police — a log of this process has been detected,” he added.

Desai claimed that NIA’s reliance on digital evidence hinted at the possibility of it knowing that “it is planted.”

“If the charge against them [Father Swamy and the others] was a threat to national security, how is this [hacking] not a bigger threat? Are you not curious to know how documents can be planted remotely on a computer? Are you not concerned that this could happen to the prime minister or the home minister tomorrow?” Desai asked.

Indian Jesuits have approached the Mumbai High Court seeking to clear Father Swamy from the false cases registered against him and restore his reputation.

The petition was filed by Father Mascarenhas, through Desai, as Father Swamy's “next of kin.” He has also sought that the court monitors the judicial inquiry into the elderly priest’s custodial death.