Few solutions in sight to help save Cambodia's largest lake 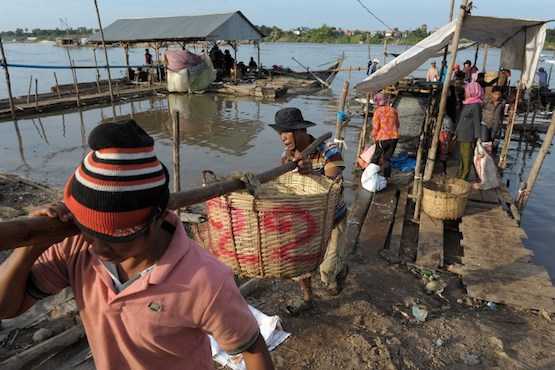 Cambodian workers carry fish to be made as 'prahok' (fermented fish paste) at a village along the Tonle Sap River — that connects the lake of the same name to the Mekong River — in Phnom Penh on Dec. 18, 2015. (Photo by Tang Chhin Sothy/AFP)

It's peacefully quiet on the shores of Sang Vor, a small village in Cambodia's Kandal province. A soft breeze blows over the Tonle Sap Lake; the sunlight is harsh.

Nom Khim, a local fisherman, looks out over the lake and points towards a small boat anchored to the shore. It's that kind of boat he uses every day to go out fishing, the 40-year-old Cambodian says. "The best time to go fishing is during the Water Festival, in November. During that time, I go out day and night. It is then when you catch the most fish."

The Tonle Sap is the biggest lake of Cambodia and one of the largest lakes in Southeast Asia. It stretches out from capital Phnom Penh to the city of Siem Reap, in the north of the country. Each year, fishermen catch up to 300,000 tons of fish in the Tonle Sap. For over a million Cambodians, who also use the water to irrigate their rice fields or for fishing farms, the lake is essential for their livelihood.

But this beating heart of Cambodia is facing serious threats. Climate change, pollution and years of over fishing are having a major impact. A sustainable solution to save the lake doesn't seem to be in sight yet.

"I started fishing when I was just 15 years old," Nom Khim says. "I remember that 15 to 20 years ago I often caught 30 kilograms of fish per day, sometimes more. Now I often catch just 2 or 3 kg, and on really bad days only 1 kg. And in the past I regularly caught a big fish of 10 kg in weight. Now that maybe happens once per month."

In Prek Toal, a largely Catholic floating village on the lake with over 900 families, people are feeling the impact of the troubles roiling Tonle Sap. Father Mark Lopez, a priest in Prek Toal, says that all fishing families are currently struggling with what he calls the worst ever year for fishing.

"Some have had to manage with only $1.5 to $2 worth of catch when they come home from an all-night expedition. In the better months, they are able to catch US$8 to $10 worth of fish," says Father Lopez. A file image of workers cleaning fish to be made as 'prahok' (fermented fish paste) at Chrang Chamres village along Tonle Sap River some seven kilometers north of Phnom Penh on January 8, 2009. The Tonle Sap River feeds into the lake of the same name which is one of South East Asia's largest. (Photo by Tang Chhin Sothy/AFP)

Environmental groups have been ringing alarm bells for some long time. In 2016, the Global Nature Fund (GNF), a non-profit foundation that is trying to protect the environment, declared Tonle Sap as the most "threatened lake of the year."

GNF said the lake, which is directly connected to the Mekong River, is endangered because of several threats, such as climate change, the construction of hydropower dams and the deforestation of large areas of primary tropical forests which are flooding during the rainy season and are essential for the lake's ecosystem.

In a wider context, these are the concerns shared by Pope Francis. In his 2015 encyclical Laudato 'si on the environment, the pontiff expressed deep concerns about pollution and climate change.

"If present trends continue, this century may well witness extraordinary climate change and an unprecedented destruction of ecosystems, with serious consequences for all of us," the pope wrote.

Developing countries will particularly feel the impact, the pope stated. "Many of the poor live in areas particularly affected by phenomena related to warming, and their means of subsistence are largely dependent on natural reserves and eco-systemic services such as agriculture, fishing and forestry," he wrote.

Father Mark Lopez agrees, as he points out that pollution is clearly on the rise. And never before has the impact of climate change been so fiercely felt as last year. "In the summer of 2016 [there were] 2,000 hectares of dried-up flood forest were burned here in Prek Toal," Father Lopez says. "That meant the loss of spawning areas for water creatures and the death of a lot of wildlife that year."

But there's more that threatens the lake. Local fishermen often blame over fishing for the reduction of their catches. Many of them say that compared with the past, many people are fishing, often with better equipment than previously used.

At the same time, there's the problem of illegal fishing, with fishermen using bigger nets than officially allowed or by using illegal methods such as electrical shocks that will stun the fish and make them come to the surface where they can easily be netted.

Om Savath, the executive director of Cambodia's Fisheries Action Coalition Team, says that illegal fishing is probably the biggest threat. "This exists because local officials are corrupt. In return for a bribe they are willing to look away," says Savath.

"Part of the problem is that the government doesn't have a clear policy against illegal fishing. The Ministry of Interior says it is committed to stop it, but the reality is different," he says. "Now some local authorities are taking action, while others don't."

Savath also has concerns about the impact of the hydropower dams that are being built in the upper Mekong. Because Southeast Asia's longest river is directly connected to the Tonle Sap, the dams are having a huge impact on the water life of Cambodia's biggest lake.

Savath says a thorough study about the impact of the dams is needed and he urges people to be better educated. "For example, so that they know that when they throw plastic into the water they are polluting the lake," he says.

Back in Sang Vor, the village on the shores of the lake, Nom Khim simply hopes things will change rapidly. If they don't, he will not have a future as a fisherman. "If nothing is done to save the lake, I'm not sure how long I can continue," he says.