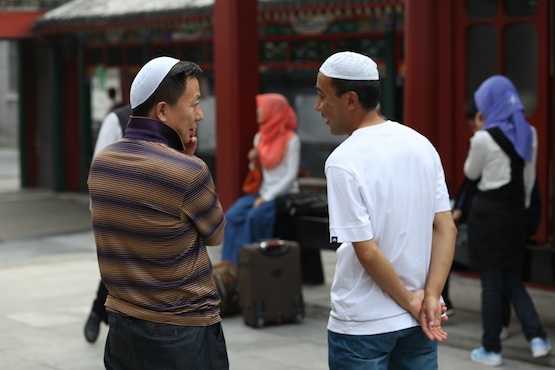 Muslims gather before prayers at Niujie Mosque, the oldest in Beijing. (Photo by ucanews.com)

In the most significant party meeting on religion since 2001, President Xi Jinping on April 22 called for greater 'Sinicization' among faith groups while warning of "ideological infringement by extremists," a reference to recent attacks blamed on Muslim Uighurs.

"I don't think this makes anything better for us," said a Muslim Uighur in Turpan who declined to give his name for security reasons. "Whatever the government decides will happen."

In the wake of a series of bloody attacks blamed on Uighurs that shook Western China in 2014, Xi's government launched a 'strike hard' campaign against terrorism in Xinjiang.

"Illegal" madrassas were closed and hundreds of children "rescued" as military and police targeted religious schools outside of government control. The Islamic crescent is deemed a terrorist symbol in Xinjiang, home to 12 million Uighurs, and long beards and burqas have been banned.

"This will give us more pressure," he told ucanews.com. "What Xi means by religion with Chinese characteristics is that the Chinese government wants to have more control over religion."

As with Christianity in China, Beijing has attempted to bring all faith groups under state-approved associations. Believers who have refused to follow these groups are deemed illegal. In Xinjiang, public notices warn of long prison terms for those who preach Islam outside of state-sanctioned mosques.

"Localization for different religions has been discussed in the past, but until the conference, people were not quite clear how this would proceed," Guo Chengzhen, vice president of the state-approved Islamic Association of China, told state news agency Xinhua.

But observers of Islam in China note policy has remained muddled for decades. Uighurs below the age of 18 are not allowed to enter mosques in Xinjiang, nor are minority Hui Muslims who live in the same region.

However, Hui minors can freely enter the many mosques in Xian further east, as can other Muslim groups across the rest of China. Administrators at the Great Mosque in Xian did not respond to emailed questions.

A decade ago, Hong Yan, the leader of a Sufi sect reportedly established a "virtual religious state" with 1.5 million followers who worship and study at a network of mosques and madrassas. Although Hong studied in Pakistan and even heard Osama bin Laden speak, he has been allowed a certain autonomy due to his unequivocal support for party rule.

Beijing has for years called on imams to mix the message of the Quran with a nationalistic tone, Jerome Doyon, author of Negotiating the Place of Islam in China, told ucanews.com.

In Jiangsu province, the subject of Doyon's book, Muslims are given more leeway compared to Salafi groups in Gansu province further west which are in turn more free than Uighurs in Xinjiang further west still. Individual religious practice is "rather free" in Jiangsu because the Muslim community remains small and the state-supervised Islamic Association is strong, he added.

Beijing treats Muslim groups differently because some are deemed more of a threat to security, sovereignty and the political status quo, said Doyon.

"The key variable is if it [a Muslim group] is potentially linked or not to separatist symbols from the Chinese Communist Party's perspective," he said.