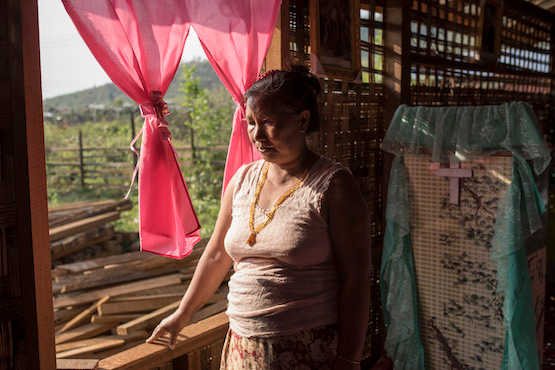 Cecilia Lu Awng at her home in Ngwe Pyaw San Pya resettlement village outside of Myitkyina in northern Kachin State, Myanmar. Since the village was built residents have attempted to restore their livelihoods lost after leaving their home villages. (Photo by Cory Wright)

Sitting out front of her small grocery store, Cecilia Lu Awng fanned herself as she talked about her struggle to survive in a resettlement area in Myanmar's conflict-torn Kachin State.

"We are afraid to go back to our native village because we may need to flee again if fighting erupts so we decided to move to this resettlement area," Lu Awng told ucanews.com.

The 57-year-old ethnic Kachin is one of thousands of people displaced by the civil war that has raged in northern Kachin State for the past six years. After spending time in an internally displaced persons camp, Lu Awng and her family moved into a new government resettlement village three years ago in the hope to restart their lives.

Lu Awng's family were excited about the move: the prospect of job opportunities and a more certain life. Ngwe Pyaw San Pya village, which they and around 1,000 others, live in is only 15 kilometers from the state capital Myiktyina. But it feels like the middle of nowhere, a settlement plonked on rocky red clay where even the hardiest plants struggle to survive. People no one wants, parked on land that no one can use. Out of sight, out of mind. The limits of Ngwe Pyaw San Pya resettlement village stretch towards the hills in northern Kachin State, Myanmar. The village was constructed for people displaced by the clashes between Kachin rebels and the Myanmar military. (Photo by Cory Wright)

The new resettlement area was purposely built by the government in 2014 for people displaced by renewed fighting between the military and the Kachin Independence Army after a 17-year ceasefire broken down on June 9, 2011.

A feeling of emptiness hangs in the heat amplified by the village's surrounding moonscape topography. Houses sit in neat rows, side by side at the foot of a hill. People huddle with little to do in their houses, sheltering from the beating sun that will soon enough become months of drenching rain.

Lu Awng explained that the harsh reality in the village flattened her hopes. Farming is impossible on the parched, infertile soil. To illustrate this, the Catholic woman pointed to a small mango tree she planted three years ago that has barley grown. Most of the residents of the village come from a subsistent existence. They have limited skills and are forced to seek any kind of work, she said. Meanwhile the village suffers frequent electricity blackouts.

She had planned to make a living through a small grocery store but that is looking unsustainable.

"Several people who opened grocery stores, which where start-ups supported by the United Nations can't run it sustainably, no one is making any profit and people are losing their capital," said Lu Awng.

A small chapel for Catholic worshipers has been constructed in the compound of her house and store because the government is yet to designate an area in the village for churches.

Her neighbor's house is a makeshift Baptist chapel. Cecilia Lu Awng's home doubles as a church, the only place of worship for Catholics in Ngwe Pyaw San Pya resettlement village. (Photo by Cory Wright)

In the village, ethnic Kachins — who are predominantly Christian — are the majority among an array of other ethnicities: Rakhines whose homeland is in western Myanmar, the central Myanmar Bamar, the country's dominant ethnic group and Lisu hill tribes people.

Since 2011, more than 100,000 people have been forced into 167 internally displaced people camps in government and non-governmental controlled areas in Kachin and northern Shan states.

Civil war has plagued the mountainous northern state on and off since Myanmar gained independence from Britain in 1948.

Most the state's 1.7 million Kachins are Christians, among them 116,000 are Catholics.

The more able bodied have resorted to migrant labor in the region's notorious jade mines or have ventured to nearby China where some find work while others fall prey to human trafficking.

Roi Taung, a 52-year-old ethnic Kachin woman moved into the resettlement village in 2016. She said her 24-year-old son frequently gets work as scavenger at the jade mines of Hpakant.

"We yearn to go back home but we don't know when we can return, so we have no other option but to live here," said Roi Taung.

Zaw Khan, a 60-year-old and his wife have resided in the relocation village for two years. Their son is working for a company in China and frequently returns to visit his family. Ngwe Pyaw San Pya resettlement village outside of Myitkyina in northern Kachin State, Myanmar. Having once been farmers, many of the village residents are finding it difficult to grow crops in the villages poor soil. (Photo by Cory Wright)

Lu Awng said she and other women attempted to go to China for work but she and another two women were forced to turn back as a local broker said they were too old.

But for Lu Awng that may have been for the best.

The Kachin Women Association Thailand (KWAT) has documented trafficking cases from the Kachin-China border since June 2011, mostly involving young women and girls displaced by the war, who have been tricked, drugged, raped, and sold to Chinese men or families as brides or bonded laborers.

"We haven't heard any news about the dozens of women who went to China, whether they are still alive or they if they have been trafficked," said Lu Awng. "And I heard the local broker has run away," she added.

The sale of women and children is a lucrative source of income for traffickers, who can make as much as 40,000 yuan (US$6,500) per person according to a 2013 report by KWAT.

KWAT said that while some women manage to escape, and may be assisted by Chinese authorities in returning home, others disappear without a trace.

"The risks women trafficked to China face is that some will face forced marriage with a Chinese man and made to have a child," said Moon Nay Li, general secretary of KWAT. "After delivering the baby, some women are trafficked again," she said.

"There is little doubt that thousands, and perhaps tens of thousands, of Kachin lives have been ruined with the victims of trafficking disappearing and their families back in Kachin State waiting patiently for news of their loved one that most likely will never come," Robertson said.

This is the second of a two-part feature series on the lives of displaced people in Myanmar's Kachin State. To read the first article click here: Uncertain future for Kachins displaced in camps.