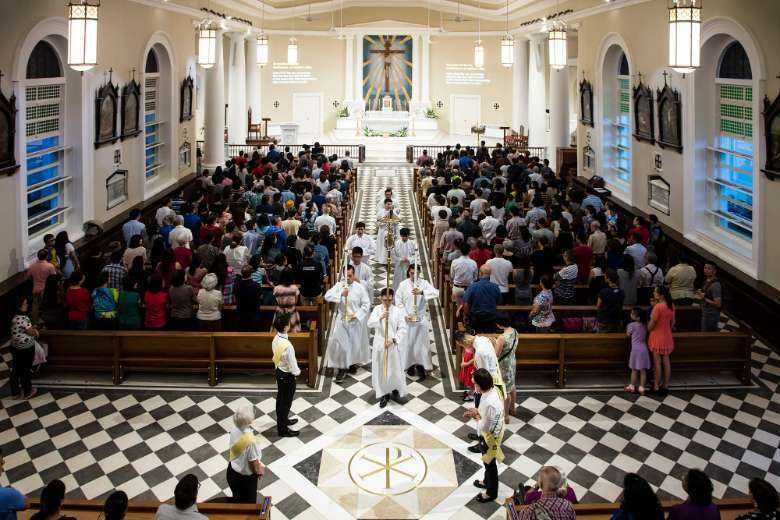 Catholics in Singapore will mark the closing of year-long celebrations of the 200th anniversary of Church’s presence in the city state with a week-long festival.

The bicentenary celebrations, known as the Catholic200SG Festival, will begin on Dec. 4 and end with concurrent Masses in all 32 Catholic churches in Singapore on Dec. 11, according to a press release from Singapore Archdiocese.

The Church will arrange for about 100 activities within the area of the Cathedral of the Good Shepherd, Church of Saints Peter and Paul on Queen’s Street, Church of St. Joseph’s on Victoria Street and the Catholic Center on Waterloo Street — the area collectively coined as Mission District.

The activities are grouped into Arts, Community, Talks and Spiritual, which offer something for everyone from young to adults and families to religious, with an aim to present what is like being a Catholic in Singapore.

“We wanted to bring the activities into this part of the city because this area is of great significance to us,” the priest said.

The Singapore Church started the jubilee year on Dec. 13 last year with a virtual Mass celebrated by Archbishop Goh

Mission District is the very heart of the early but growing Catholic community that took root as Singapore began to flourish because of trade, he said.

It was in this very part of town where various Chinese dialect groups, Indian and European-speaking communities came to worship and help each other in difficult times. It was also the area where many Catholic schools had their founding, he added.

On the festival's final day, Archbishop William Goh of Singapore will celebrate the main Mass at 6pm in the Cathedral of the Good Shepherd, the oldest Catholic church in the country. The simultaneous ringing of the church bells across the island for one minute will mark the closing of the jubilee year.

Among the dignitaries to attend the anniversary Mass will be Prime Minister Lee Hsien Loong. The apostolic nuncio, Archbishop Marek Zalewski, will concelebrate at the Mass.

The Singapore Church started the jubilee year on Dec. 13 last year with a virtual Mass celebrated by Archbishop Goh. A jubilee website and a special jubilee logo were launched and a documentary on the social impact of the Catholic Church in Singapore was screened.

The theme for the jubilee year, “Ignite and Shine with Faith,” focused on the pastoral vision of the Archdiocese of Singapore aiming to shape a more vibrant, evangelizing and missionary church.

Events focused on renewing the faith of the Catholic community through four aspects: deepen, discern, witness and celebrate.

Archbishop Goh said this historic milestone is an opportunity to galvanize Catholics for the past, present and future.

“We want to celebrate with gratitude and thanksgiving how far we have come. We must empower our Catholics today to be vibrant in their faith and evangelize. And we should inspire all to work for a future when humanity and creation find completion in God,” the prelate said.

He was martyred on Sept. 21, 1839 in Korea, for refusing to reveal the whereabouts of other foreign missionaries during a time of Christian persecution in the country. He was canonized by Pope John Paul II in Seoul on May 6, 1984.

The date of Father Laurent’s arrival in Singapore is historically known as the beginning of the Catholic Church in Singapore.

Singapore is a multi-religious and multi-ethnic nation with an estimated population of 5.6 million. Most Chinese are Buddhists and most Malays are Muslims. Christians make up about 15 percent of the population.