Feeling the pinch and saying goodbye 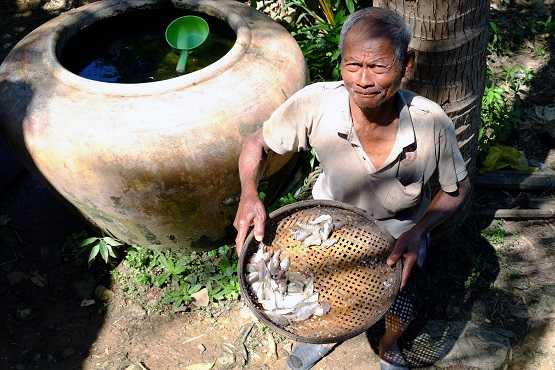 Outh Hien holds up his catch from five attempts with the net. He says fish catches are so pathetic that his grandchildren will not carry on the family fishing tradition. (Photo by Luke Hunt)

For centuries Outh Hien's ancestors fished the waters of the Tonle Sap and Mekong River. It was a lifestyle that put food on the table and gave birth to a culture that supported millions of fishing families who live along the muddied river banks.

That almost came to an end with the Khmer Rouge who wiped-out a third of the population — or about two million people — during their bloody reign, including all of Outh Hien's family leaving the 69-year-old as the last of his lineage to ply these waters.

"They killed my parents, brothers, sisters, 12 people. We always fished and that kept us going through good times and bad," he said, shaking his head. "Under Pol Pot, 1975 to 1979, it was very bad."

But the livelihood that sustained generations of his ilk and survived the Khmer Rouge is now disappearing fast. His fish catch has plummeted over the last 10 years amid rampant over-fishing, illegal use of equipment like electric nets and dam construction upstream in Laos and China.

"Five times I flung my net this morning and this is all I got," Outh Hien said, while holding up his miserable catch of barely a dozen tiny fish. Hardly enough for the village cats.

"I have also heard Laos is building a third dam across the Mekong River. That's it for me — no fish, my grandchildren will do something else," he said. Fish are laid out to dry in a Khmer Cham village on the banks of the Tonle Sap. Local fishermen blame falling fish catches on increased dam construction upstream in Laos. (Photo by Luke Hunt)

Food security for the 70 million people who live hand to mouth off the Mekong River and its tributaries like the Tonle Sap has emerged as perhaps the biggest issue confronting the Vietnamese and Cambodian governments faced with massive dam construction up north in Laos.

Decades of war meant comparable statistics for fish stocks are skewered. Much of the evidence is anecdotal but overwhelming as Outh Hien remembers the heady days of fishing just after the Khmer Rouge were ousted from power in 1979.

Ordinary life had ground to a halt and fish numbers boomed amid an absence of fishing. Outh Hien recalled, "you would cast your net once and it would fill the boat, brimming with fish."

Of the science that does exists, sources tied to the Mekong River Commission, speaking on condition of anonymity, argue there are other compelling circumstances impacting on fish catches.

The population living off the basin has risen by at least 10 million people, from 60 million in the past 20 years, thus increasing demand. Importantly, "fishing down" — where large fish are depleted and are replaced by previously unwanted small fish — is a chronic issue.

In 2015 the total fish harvest from the Mekong River and its lower delta was valued for the first time, at US$11 billion a year, by the fisheries research and development newsletter, Catch and Culture.

Many of the 850 fish species covered by the research, including the Irrwaddy Dolphin and the giant Catfish, are endangered.

"It should also be mentioned that fishing is an integral part of the livelihoods, culture, and food security coping strategies of upland peoples who are mostly indigenous or ethnic minority groups showing the highest poverty incidences in the region," the Catch and Culture report added.

But this cuts little ice with the authorities in Vientiane who have been accused of ignoring the science and the needs of downstream communities in its quest to turn the isolated and impoverished state into "the battery of Asia."

It plans to sell hydro-electricity to neighboring countries through the construction of 11 dams across the mainstream of the Mekong River, and another 123 elsewhere.

Few people would deny Laos the right to construct dams along tributaries of the Mekong. Its tall caverns and mighty rivers are an ideal geography for dams and hydro-powered electricity grids.

However, what has deeply upset many is the damming of the mainstream of the Mekong River and destruction of a natural habitat that allows fish to migrate upstream and spawn.

The environmental trouble began with the go-ahead of the US$3.8 billion Xayaburi dam in 2012. Then the Don Sahong dam at Siphandone, part of the famed 4,000 Islands, just north of the Cambodian border got the go-ahead at a cost of US$300 million.

What angered Outh Hien and others, however, was just this month when Vientiane said it would proceed with its third dam across the mainstream at Pak Beng for US$1.88 billion.

"My grandchildren will only go to school — there is no fishing for them only for me and my wife," he said, acknowledging his 67-year-old partner, Hy Yiek, with a smile.

It ended with this year's monsoon but in fishing villages across the Mekong Delta people blame upstream dams for exacerbating a very difficult dry period marred by the unprecedented cancellation of the annual boat races in Phnom Penh last year due to low water levels.

Climate change and salt contamination, harshly felt during the drought, from rising sea levels are among other threats and this is also impacting Islamic communities.

Muslim Chams — for religious reasons — opt for fish as their chief source of protein. That dietary requirement is behind the Chams’ traditional dominance of the local fishing industry, which they also say, is now on the verge of collapse thanks to Laos dam construction.

"The fish levels are becoming lower and lower and the Khmer Islam people are moving into other businesses," said Musa Ka, Imam at the nearby Al-Mubarak mosque. "People are opening shops and selling goods, others are driving tuk tuks and some are going into fish farming." Musa Ka, Imam of the Al Mubarak mosque says Muslim Chams are no longer fishing in the same numbers they once did and are looking for alternative employment. (Photo by Luke Hunt)

Aquaculture is making substantial inroads into the Mekong River economy and this has helped to offset losses elsewhere among fishing folk around Samraong and its neighboring commune Preak Phnov.

According to Catch and Culture growth rates, for aquaculture in the Mekong River Basin are three times faster than global growth while its contribution was valued at about US$5.8 billion in 2015, up from US$4.8 billion in 2010 and less than US$1 billion in 2003.

But business is fickle.

"Some months are good, some months are not so good," said Sok Chanty, 40, who turned to fish farming as traditional fish stocks fell. He provides baby fish reared in ponds for restaurateurs while some will go on sale at nearby markets.

"The work is easier," he says pointing to staff, who monitor the ponds from the comfort of a shaded hammock. "Fishing in the Mekong is back breaking over the years and why would you do that if the returns are so small?"

For those reasons world aquaculture production is expected to surpass the production of traditional fish catches in 2023 and that should help re-orientate the industry and improve the lives of millions in the Mekong River Basin, especially those who live a traditional hand-to-mouth existence.

"The transition out of fishing has started," Musa, at the Al-Mubarak mosque said.

"It's not too bad, particularly for the educated as some are getting better jobs and are better off. But it's also sad because we could be seeing the end of an era and what this means for food and feeding so many people — we really don't know, yet," he added.