Will displaced Kachin Christians be able to vote?

Aid workers warn of disenfranchisement ahead of Myanmar election 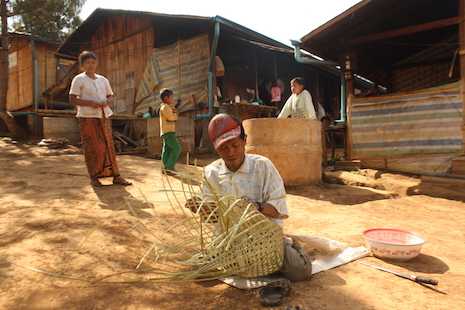 Thousands of people displaced by conflict in Myanmar’s Kachin state could find themselves without a vote during the highly anticipated Nov. 8 elections, local politicians and aid workers are warning.

Tu Ja, a Catholic Kachin politician from the Kachin State Democracy Party, predicted the closure of polling stations in some constituencies, especially in Kachin Independence Army-controlled areas and border regions.

“Each citizen’s vote is very important for candidates, especially ethnic representatives who will be able to help the state’s development. But I have a bit of concern that the people in conflict areas and the [displaced people] will lose their right to vote,” Tu Ja, a former vice president of the Kachin Independence Organization, told ucanews.com on Aug. 21.

More than 100,000 Kachins have been displaced since 2011 following the breakdown of a 17-year ceasefire between Myanmar’s military and Kachin rebels.

Internally displaced people, many of them Christians, have been living in temporary camps in government and rebel-controlled areas in Kachin and northern Shan states.

Tu Ja said people in Kachin state are willing to vote but voting lists have not been put up in all camps.

“I think not all Kachin [displaced people] will get a chance to vote, which could lead to losses for ethnic candidates as most of the people will surely vote for ethnic parties. But I have a high expectation that more Christian ethnic Kachins will win parliament seats [regardless],” said Tu Ja.

“I am concerned by the possible disenfranchisement of those living in conflict-affected areas such as Kachin and northern Shan states, as well as other parts of Myanmar where elections may be canceled for security reasons,” Lee said in an Aug. 7 statement.

The nonprofit U.S.-based Carter Center said in an Aug. 19 report that ethnic parties and armed groups will likely be skeptical of decisions to cancel polling in areas where they have support.

“While some cancellations may be necessary for legitimate security reasons, last-minute and non-transparent cancellations could create security risks and affect the credibility of elections especially in constituencies where ethnic parties expect to perform well,” warns the report.

In Kachin state, Christians are in the majority and their vote could play a key role for ethnic representation in parliament.

Kachin aid worker Gum Sha Awng said that he is concerned not only about voting rights but also humanitarian aid for displaced people. Another 1,400 people recently fled their homes in northern Kachin state due to fighting and are in dire need of food as the military continues to deny access to Church groups and aid organizations.

“Security and stability in Kachin state is directly related with the ongoing peace process. If there are no prospects of peace, conflict may erupt again in ethnic areas and as a result, people will not be able go to polling stations,” said Gum Sha Awng, program coordinator for Metta Development Foundation, a nongovernmental group carrying out humanitarian aid for displaced people in Kachin.