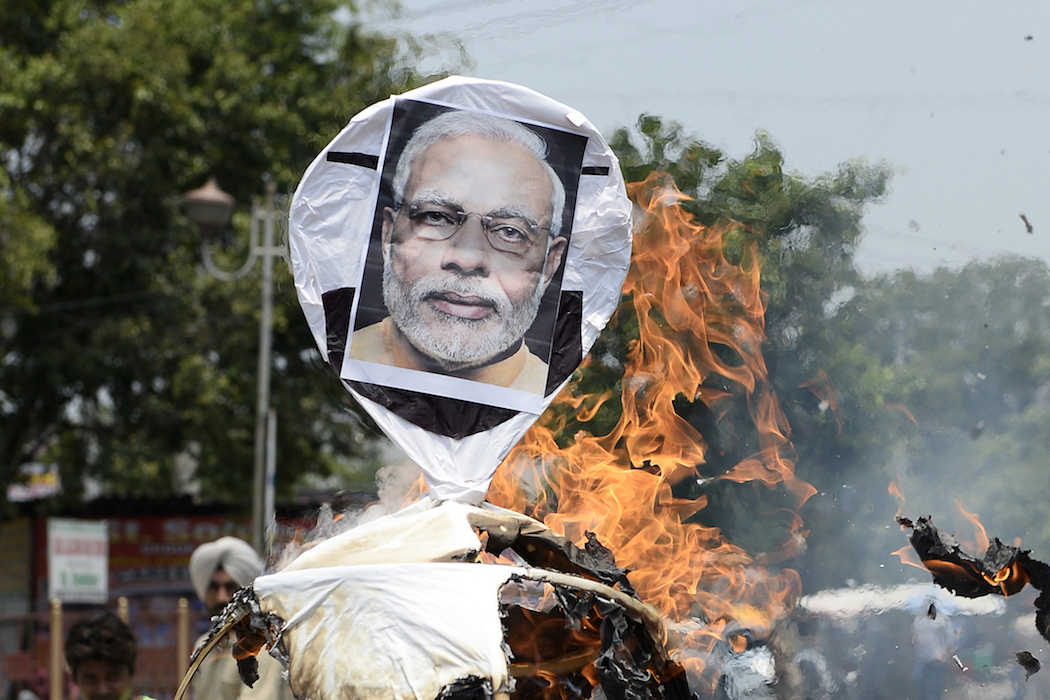 Congress party activists burn an effigy of Indian Prime Minister Narendra Modi during a protest against a fuel price hike in Jalandhar on June 7. (Photo by Shammi Mehra/AFP)

National elections in India are due in May 2019 when the federal government run by the pro-Hindu Bharatiya Janata Party (BJP) completes its five-year term.

Fears are growing among religious minorities, socially poor Dalit people and a section of opposition parties about religion taking center stage and triggering violence to the electoral advantage of the BJP.

Some observers even fear the possibility of a limited war with neighboring Pakistan to milk sectarian sentiments among Hindus, who form 80 percent of India's 1.2 billion people.

However, circles close to the Prime Minister's Office rule out both as "silly" possibilities. They claim that Prime Minister Narendra Modi's track record and several pro-poor schemes on the anvil are enough for his party to get re-elected.

The BJP appears to be in a dilemma — whether to push the Hindu nationhood ideology of Hindutva to sharpen communal polarization or to stick to economic growth and development as its poll plank.

In the run-up to the previous national election in 2014, the BJP marketed Modi as a development icon and anti-corruption crusader to woo centrist forces and ideology-neutral voters. Four years down the line, the government's track record on both counts is dismal. So, what will be the narrative for the 2019 polls?

During a television talk show on May 5, senior BJP lawmaker Subramanian Swamy indirectly admitted that the BJP will use communalism to counter the rival Congress party's caste-based politics and that development will only be a peripheral issue.

"Congress has been trying to divide Hindus on caste, which is a more dangerous thing. We were trying to unite Hindus by saying caste is not important, what is important is that Hinduism is in danger. Today we would think that if Congress comes to power, it will be catastrophic for us, so, therefore, this Hindutva thing will be done in 2019," Swamy said.

Answering a question on why the BJP is looking backward and why its entire focus is on history, Swamy said: "I have studied elections since 1952, and peripherally economic issues come up."

In its fifth and final year in office, Modi's government is faced with multiple demons. On the economic front are high inflation, growing unemployment and an agrarian crisis, while on the social front is the alienation of Dalits, indigenous people and religious minorities.

On the political front, the BJP's unbridled quest for power at any cost has posed an existential challenge to the opposition. Modi and BJP president Amit Shah time and again have bragged about their plans for an opposition-free India. In the prevailing political ecosystem, the opposition has no option but to swim together or sink.

Recent by-election results have shown that wherever the opposition is united, the BJP lost. In the last three years, rivals have wrested as many as 10 parliament seats from the BJP and allies. Last month in Khairana (Uttar Pradesh state), the opposition managed to broker peace between two estranged communities — the Jats and Muslims. The result was its joint candidate, a Muslim woman, defeated the BJP nominee with ease.

The BJP's ascension to power has been characterized by communal clashes between Hindus and Muslims.

Indian politics has also been marked by efforts to make Christians victims of communal hatred. Christians have been complaining of increased incidents of violence and intimidation from Hindu groups pushing the idea of Hindu nationhood.

The violence against religious minorities and the government's silence on it come amid fears that the BJP might rewrite the secular ideals of the Indian constitution to suit its work for Hindutva, the official ideology of the party since 1989.

Two Catholic bishops in their separate pastoral letters in May and June expressed fears that the constitution was under threat, asking their people to work and pray that the 2019 election produce a government sensitive to the rights of India's poor and minorities.

Modi and the BJP seem to be unconcerned about the votes of religious minorities. In the 2014 election in heartland Uttar Pradesh, where the party secured an unprecedented 71 out of 80 seats, the BJP fielded no Muslim candidates and no Muslim was elected to parliament despite Muslims forming 20 percent of the state's 200 million people.

Many believe the BJP swept the 2014 polls in Uttar Pradesh due to large communal polarization. Its simple poll tactic has always been to consolidate Hindu votes by projecting itself as the champion of Hindu interests. Sectarian violence then becomes the essential tool for such projections.

Sectarian flare-ups have recently been reported in the states of Assam, Maharashtra and Meghalaya. However, analysts discount the possibility of major communal violence ahead of next year's polls as it can be politically risky. Instead, many fear that low-intensity conflagration may be triggered to keep the divisive pot boiling.

According to a recent "Mood of the Nation" survey published by the Lokniti, part of the Centre for the Study of Developing Societies, Modi's popularity has fallen by 12 percent in the past year. Nevertheless, all is still not lost for the prime minister. He has several aces up his sleeve.

Modi continues to be his party's most popular face, while the opposition does not have a pan-India leader. The BJP is flush with funds as against cash-starved opposition parties. The BJP also enjoys disproportionate and unwholesome support from the Indian media.

Modi and his party president have succeeded in pre-empting opposition alliances by adopting a carrot-and-stick policy. Some opposition leaders facing corruption charges are vulnerable, especially when investigating agencies are working as the political arm of the government.

The prime minister is expected to unleash a slew of pro-poor, pro-Dalit welfare measures in the run-up to the election. He can also boast of some good work on infrastructure building and pushing structural and tax reforms to speed up development.

By-election results have shown that playing the Hindu card alone may not fetch a majority for the BJP. However, much will depend on the strength of opposition unity and its ability to neutralize the BJP's emotive and communal narrative with bread and butter issues.

Kay Benedict is a senior journalist and political analyst based in New Delhi.