Faith leaders say law will be used to limit freedoms Catholics hold candles while marching as they take part in holy year celebrations in the northern province of Ha Nam in this November 2009 photo. (Photo by Hoang Dinh Nam/AFP)

Share this article :
With Vietnam's parliament set to debate a controversial new law on religion in the coming weeks, spiritual leaders in Ho Chi Minh City are anxious the law will undermine religious growth and be used to justify harsh crackdowns. The fifth version of the draft Law on Belief and Religion is set to be heard at the latest session of the National Assembly, which began in late October and runs through November. While the government has defended the bill as necessary to national security, Christian groups and others have warned that the law is a thinly veiled way to monitor and control religious movement. "To the outside world, Vietnam allows freedom to follow any religion, but it’s not true. The government wants to toughen the law — it's like tightening the noose," Le Quang Hien, a Hoa Hao Buddhist leader in Ho Chi Minh City and member of the Interfaith Council of Vietnam, told ucanews.com in an interview earlier this month. In a report printed Oct. 5 in the Vietnam "Law and Legal Forum Magazine," a state media publication, Nguyen Khac Huy of the Government Committee for Religious Affairs said the law was meant to "concretize" the constitutional right to religious freedom. "At the same time, it seeks to strengthen discipline and responsibility in belief and religious activities of religious organizations and competent state agencies," he wrote.
Related News 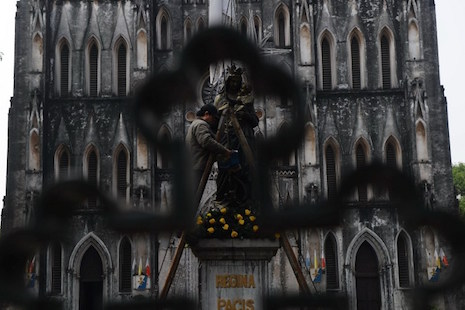 The limitations on religious freedom, he wrote, will come "in cases of necessity for the reasons of national defense, national security, public order, social ethics, and community well-being." Those limitations have raised concern among religious leaders and laypeople. While churches, pagodas and mosques have flourished in recent years, the government still keeps a heavy hand on religious activity, particularly that which is viewed as evangelical.
'Night and day' In the highlands, ethnic minority Christians are routinely harassed and detained and their churches destroyed by local officials. Catholic activists who speak out on repressive government policy have been handed stiff prison sentences, while those from splinter sects or who attempt to preach religions not officially recognized by the government have been brutally attacked. "We don't have much hope about the new law," said a senior Jesuit official, who — like many of those interviewed — asked not to be named for fear of angering the government. Several Protestant pastors said they believed the law was meant to curb growth of the "house church" movement, which has ballooned in the past decade. While such churches are licensed and recognized by the government, Protestant leaders have reported difficulty in evangelizing and getting permission for new churches. "I heard it will be official in 2016 and that it will make things more difficult than now. I heard from my colleagues that it’s going to be very difficult to build a new house church in a different place," said the pastor of a mid-sized house church near downtown Ho Chi Minh City. "According to the laws, there is freedom of religion but the government wants to take control… it’s not only [the situation] in Vietnam but other communist countries. Communists are godless, they don’t believe in God. Communists and religion are like day and night," he added. Chief among the concerns over the new law are articles that require registration of festivals, activities and movement — restrictions that echo China’s harsh and highly criticized restrictions. "After 2016, the government won’t approve any more openings of a new house church. Say if you want to open a new house church, you have to buy the land and the local government won’t approve the land sale," predicted a pastor’s wife, who helps run a small house church on the outskirts of Ho Chi Minh City. "It's going to have a strong effect on religion," echoed her husband. But, he added, "the fact is, the more they want to control Christianity, the more powerful it will become. I still believe that." Catholic officials have publicly raised concerns about the draft law. In August, Archbishop Leopoldo Girelli, the Vatican's nonresident representative to Vietnam, called the proposed law "a step backward." He said the local church was hoping to have a chance to provide feedback on the draft law.